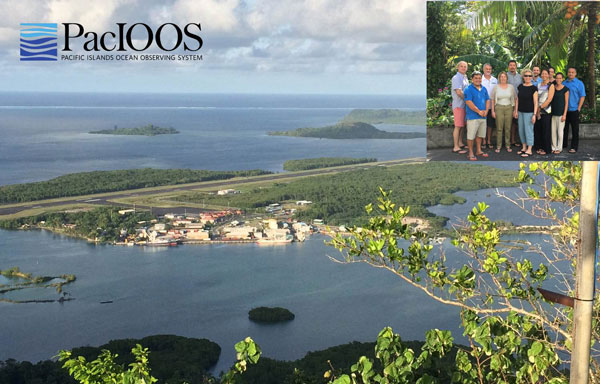 The first order of business is getting there. We all met in Hawaii and left on Monday on the “Island hopper,” which is fancy way of saying a long, multi-leg flight. First up: Majuro, followed by Kwajalein, Kosrae, and finally Pohnpei – 10 hours later and across the international dateline. 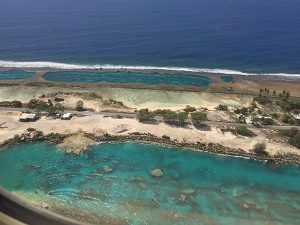 On approach to Majuro 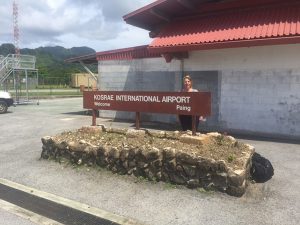 At the airport on Kosrae 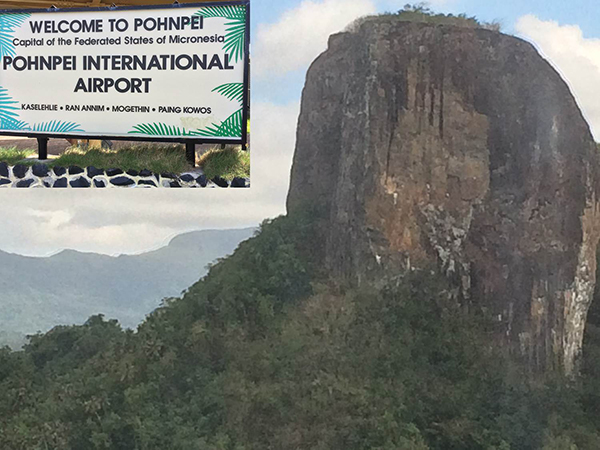 The approach to Pohnpei

The airports we visited all consist of one runway and a small transit building. On each landing the brakes are applied immediately upon touchdown--think of stopping on a dime--because the runways are just long enough to land the large planes. It gives you an appreciation of the breadth of the PacIOOS region. With the exception of Kwajalein Atoll (no photos, please!), these photos give you an idea of how interesting the trip was. 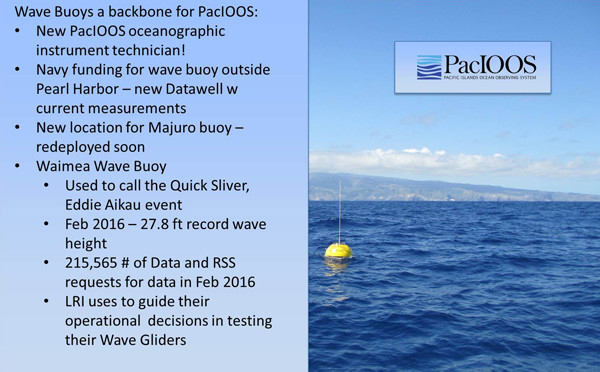 Slide showing the new PacIOOS logo in the upper right

On Pohnpei, it was down to business. Melissa started the meeting by reminding us why we were gathered - we all believe ocean data can save lives and resources – capital, environmental and cultural.

PacIOOS maintains a critical backbone of wave buoys in the Pacific, HF Radar in Hawaii and water quality stations across the region. They continue to work on tailored modeling throughout the region and rolling out their wave run-up forecast tool. PacIOOS has an extensive outreach program and recently participated in a University of Hawaii, SOEST's open house that drew 6000 visitors.

With that message setting the tone for the meeting, the committee moved on to more focused sessions, laying the groundwork for the new strategic plan that PacIOOS will develop this year. I provided the perspective from IOOS at the national and international level. See my presentation here. This was followed by Ru, who provided the IOOS Association and NERACOOS presentation. Melissa then provided a PacIOOS overview, discussing the internal review and planning for the next 5-year award cycle. 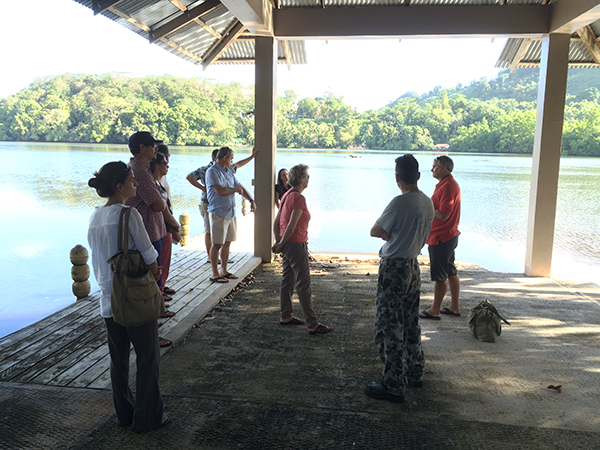 Simon Ellis explains the need for the water quality sensor

Simon Ellis engages with the community for PacIOOS and maintains the nearshore sensor on the Nanpil River. This sensor is important for understanding the sediment flows. For instance, sakau is an important crop to Pohnpei both economically and culturally, but as the forests on the hillside are being cleared to grow the plant, it is creating sediment issues in coastal waters by exacerbating sediment plumes and increasing landslides. There is an ongoing campaign to “grow low” to mitigate the issue. The water quality sensor is an important part of monitoring sediment levels. 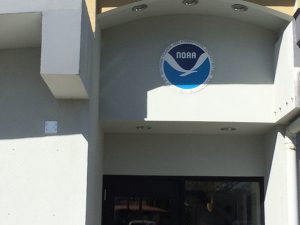 Explaining the "Chatty Beetle," a text alert system so-called because of the chirping sound that alerts you to a message. It is an important tool for weather alerts such as typhoons and tsunamis in the region. 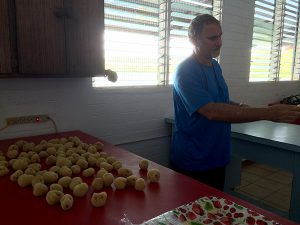 Simon Ellis with not potatoes, but sustainably grown sponges 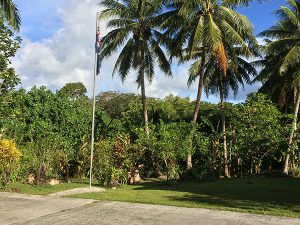 Australian Naval installation where the water quality instrument is located.

We had the chance to do a number of site visits while we were there: NOAA’s Weather Service Office that provides round the clock observations; the historic ruins of Nan Madol; the Australian Navy compound (where the water quality sensor is located); and MERIP. MERIP, founded in 1997 as part of the Ponape Agriculture and Trade School, initially focused on teaching practical marine sciences to students from all over Micronesia. In 2005, their focus changed to implementing sustainable development projects for rural communities in Pohnpei and the Micronesia region, like sponge farming. It takes about a year for the sponges to grow and while the market for these sponges is taking off, it has been hard to increase the amount of farming. We were able to get a fish’s-eye view of the sponge endeavor by snorkeling above it. 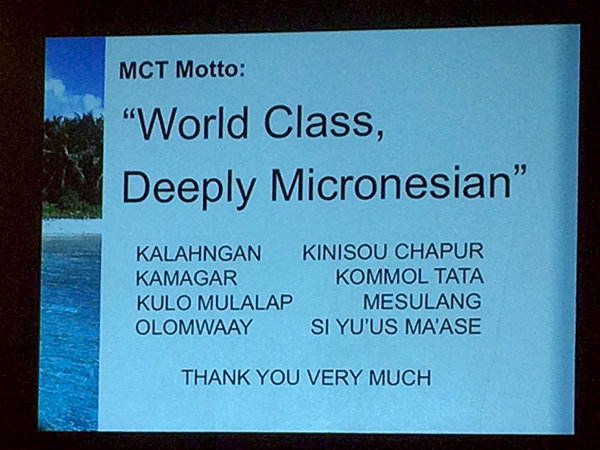 Willy Kostka talked about issues facing the region including sea level rise, ocean acidification, and increased storms and tsunamis. The trust, established in 2002, achieves an 80% re-granting level of funds it receives. We discussed potential greater partnerships between the MCT and PacIOOS. 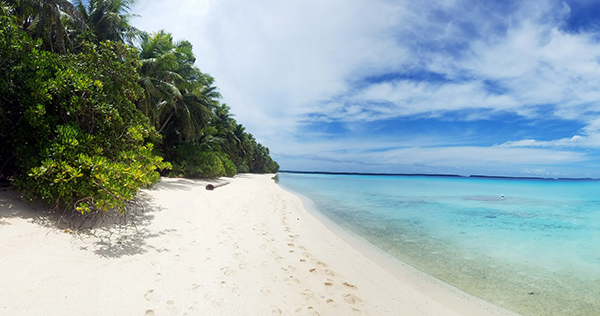 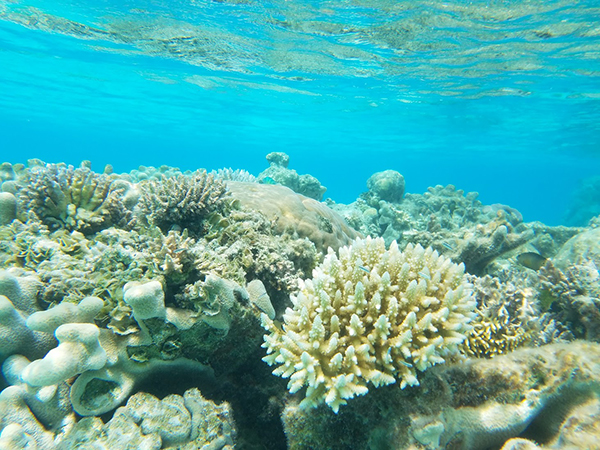 On our final day we had the chance to visit the lovely Ant Atoll, an hour's boat ride from Pohnpei, for a day of in situ ocean observing. Ant is a place of beautiful pristine beaches and thriving reefs. Land on Pohnpei is not sold but passed down through the family and Ant Atoll is owned by a family. It is very fortunate that the current head of the owning family has declared Ant Atoll a protected area and does not permit fishing inside the lagoon. He has set up 24-hour presence and patrol of the area and visits are controlled. It's a truly positive step in keeping Ant in its current condition.

Finally, we spent an afternoon on a robust strategic planning conversation. The executive committee members were engaged and enthusiastic, and having Ru and Molly there gave a perspective from two other regions that have made similar efforts. It was stated that, for PacIOOS, the 3 keys to success are outreach, data and leadership. The overall theme is that PacIOOS improves the quality of life for the people in the region and their operation and efforts are closely tied to the Pacific island inhabitants and their culture. 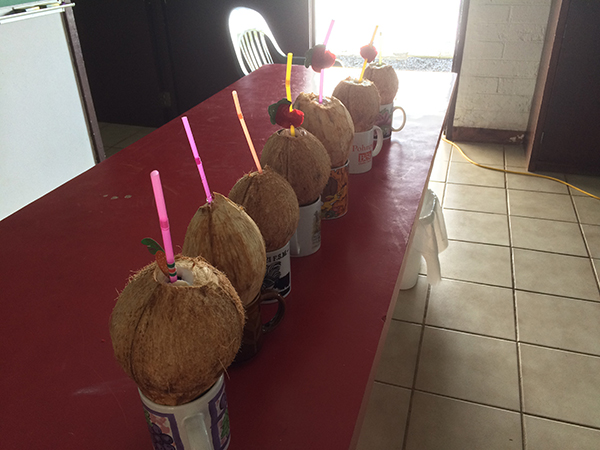 You can’t go to Pohnpei without enjoying fresh coconuts!