The global ocean observing system for climate, which contributes to the global in situ component of the U.S. Integrated Ocean Observing System (IOOS), has now achieved about 61% of its initial design goal.  While this observing system, implemented cooperatively by over seventy countries worldwide, serves multiple applications, it is designed primarily to address climate requirements defined by the international Global Climate Observing System (GCOS).   The U.S. contribution to the system, described here, is implemented as an interdependent set of observational subsystems that constitute about half of the over 8,000 observing platforms deployed by the world community.

While designed to provide information that is critical to NOAA’s climate and weather forecast missions, global ocean observations also support: 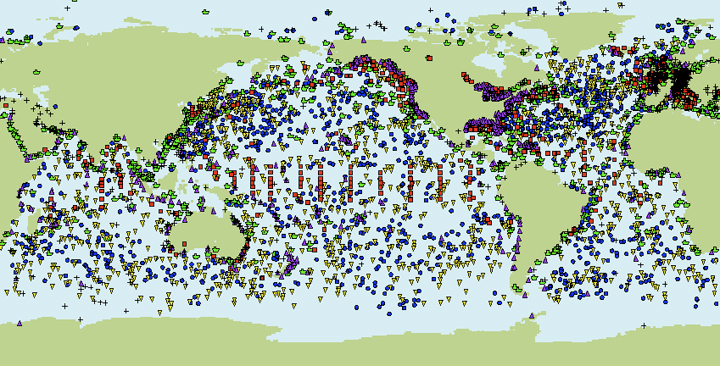 This system strives to deliver continuous instrumental records and global analyses of the following phenomena, which serve as scientific drivers of the observing system:

Ocean Heat Content and Transport, to better understand the extent to which the ocean sequesters heat, to identify where heat enters the ocean and where it emerges to interact with the atmosphere, and to identify changes in thermohaline circulation and monitor for indications of possible abrupt climate change.

Air-Sea Exchanges of Heat, Momentum, and Freshwater, to identify changes in forcing functions driving ocean and atmospheric conditions, and to elucidate oceanic influences on the global water cycle.

Sea Level, to identify changes resulting from trends and variability in climate.

Ocean Carbon Uptake and Content, to better understand the extent to which the ocean sequesters CO2 and how cycling among ocean-land-atmosphere carbon reservoirs varies on seasonal-to-decadal time scales. 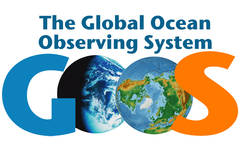 GOOS is a system of programs, each of which is working on different and complementary aspects of establishing an operational ocean observation capability for all of the world's nations.  International cooperation is always the first priority of GOOS.

GOOS is designed and being implemented to embrace the oceans as a single entity, to provide a global view of the ocean system.  It is a permanent global system for observations, modeling, and analysis of marine and ocean variables to support operational ocean services worldwide.  GOOS provides accurate descriptions of the present state of the oceans, including living resources, continuous forecasts of the future conditions of the sea for as far ahead as possible, and the basis for forecasts of climate change.

GOOS is designed to monitor, understand and predict weather and climate; describe and forecast the state of the ocean, including living resources; improve management of marine and coastal ecosystems and resources; mitigate damage from natural hazards and pollution; protect life and property on coasts and at sea; and enable scientific research.

GOOS is implemented by member states via their government agencies, navies and oceanographic research institutions working together in a wide range of thematic panels and regional alliances.  The U.S. IOOS GOOS Regional Alliance is the GOOS IOC interface to the U.S. Integrated Ocean Observing System (IOOS).

The Panel for Integrated Coastal Observations, PICO, part of the GOOS, Scientific Steering Committee, has submitted its final report on the implementation of the Coastal Module of GOOS to the GOOS Project Office for publication in the coming months by the IOC.

Logo of the Group on Earth Observations, GEO

The Group on Earth Observations, GEO, is coordinating efforts to build a Global Earth Observation System of Systems, or GEOSS.  GEO was launched in response to calls for action by the 2002 World Summit on Sustainable Development and by the G8 (Group of Eight) leading industrialized countries. These high-level meetings recognized that international collaboration is essential for exploiting the growing potential of Earth observations to support decision making in an increasingly complex and environmentally stressed world.

GEO is a voluntary partnership of governments and international organizations. It provides a framework within which these partners can develop new projects and coordinate their strategies and investments. As of March 2012, GEO’s Members include 88 Governments and the European Commission. In addition, 64 intergovernmental, international, and regional organizations with a mandate in Earth observation or related issues have been recognized as Participating Organizations.

GEO is constructing GEOSS on the basis of a 10-Year Implementation Plan for the period 2005 to 2015. The Plan defines a vision statement for GEOSS, its purpose and scope, expected benefits, and the nine “Societal Benefit Areas” of disasters, health, energy, climate, water, weather, ecosystems, agriculture and biodiversity.

GEO is coordinating efforts to build a Global Earth Observation System of Systems, or GEOSS. GOOS is the oceanographic component of GEOSS.

Global HF radar network had been established to share important ocean current data between nations. The network will also enable the sharing of information and expertise for the creation of new national radar networks, enhancement of existing networks and training of personnel. Further details are available at the Group on Earth Observation, GEO, Global High Frequency (HF) Radar Network Component section.

Under the auspices of GEOSS, a task has been submitted for the 2012-2015 Work Plan of GEO, entitled "Blue Planet".  The intent is to provide sustained ocean observations and information to underpin the development, and assess the efficacy, of global-change adaptation measures (such as those related to vulnerability and impacts of sea-level rise).

Further, it would improve the global coverage and data accuracy of coastal and open-ocean observing systems (remote-sensing and in-situ); coordinate and promote the gathering, processing, and analysis of ocean observations; develop a global operational ocean forecasting network; establish a global ocean information system by making observations and information, generated on a routine basis, available through the GEOSS Common Infrastructure; provide advanced training in ocean observations, especially for developing countries; and, raise awareness of biodiversity issues in the ocean.