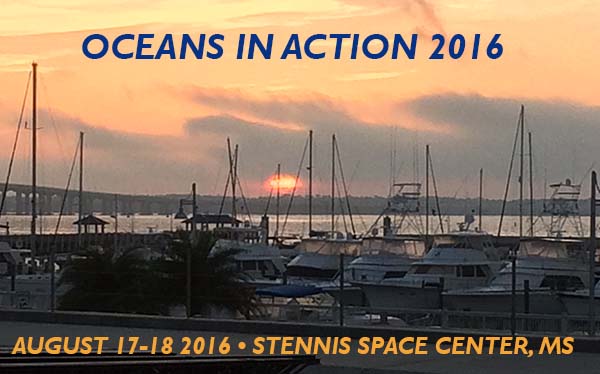 This year's Oceans in Action conference, a jointly supported Marine Technology Society (MTS) and Marine Enterprise for Technology with sponsorship from RPS Inc, MIST cluster, Hancock County and General Dynamics, was held at Stennis Space Center in Mississippi. The conference focuses on marine technology in the Gulf coastal region, and I was fortunate to be able to both attend the conference as well as sit on a panel examining ocean observing efforts in the Gulf. The first day focused on talks from senior members of the area ocean enterprise with the second day reserved for panels.

The talks were engaging and tackled a number of topics near and dear to IOOS. Highlights included:

Bill Burnett, Deputy Commander/Technical Director, Naval Meteorological and Oceanographic Command, discussed Navy Oceanography’s change to the tasking, collection, processing, exploitation, analysis and dissemination processes to describe the services that they provide--it's always good to speak the same Navy lingo. He made a call for partnerships with agencies and industries to use the Navy’s “pool of profiling gliders.” 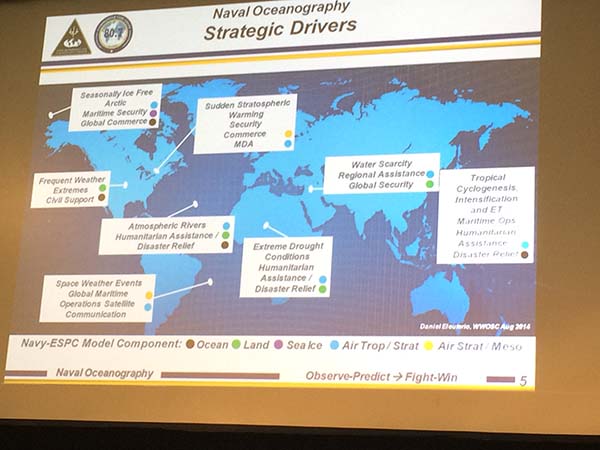 Helmut Portmann, NOAA National Data Buoy Center (NDBC), discussed the many uses of the coastal and open ocean buoys. NDBC has been putting cameras on their buoys with one purpose: to track vandalism and illegal fishing. But alas, the fisherman have gotten wise and send out small boats who tie rags around the cameras, removing them as they leave. Helmut made the point that it continues that a majority of the data being processed by NDBC to the Global Telecommunications System (GTS) is from National Ocean Center and IOOS Regional Associations. 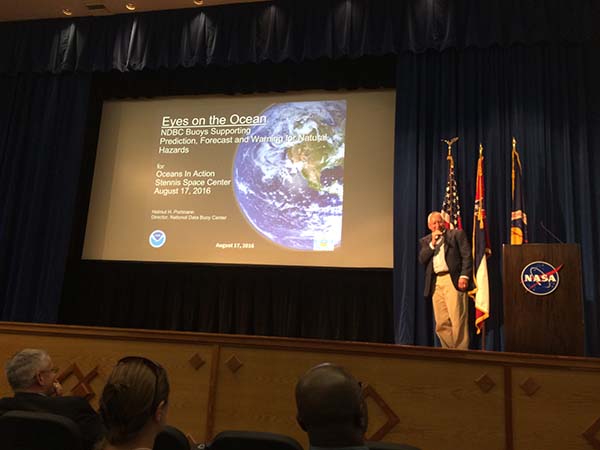 Sharon Mesick, NOAA’s National Center for Environmental Information, discussed their new strategic vision, efforts on customer engagement and data dashboard visualization of who is using their data. This spans a breadth of users from the agricultural sector to maritime commerce. 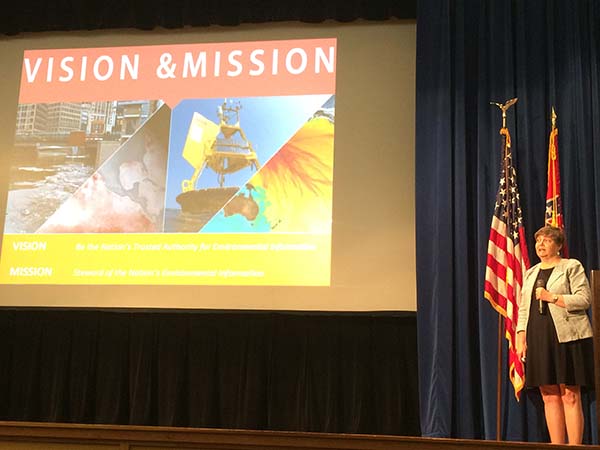 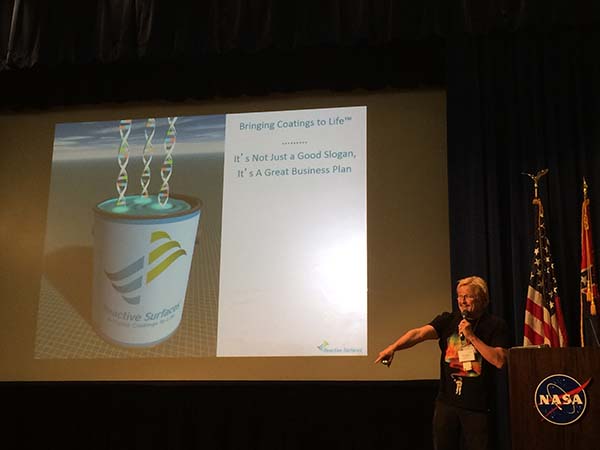 The final presentation of day one was by Eoin Howlett, RPS, who wowed the audience with several demonstrations of how RPS-ASA has taken IOOS standards to support USACE, USCG and MARACOOS. I had several folks come up afterwards and say: "IOOS gets it!"

Later on, I had the chance to visit with NDBC to see Self-Contained Ocean Observations Payload (SCOOP) buoys, it is a real game changer and visit NDBC’s mission control center! 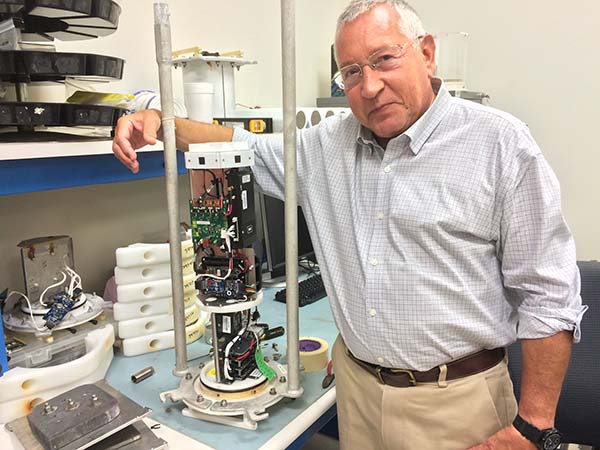 Helmut with the guts of the SCOOP buoy. Photo credit: NOAA/IOOS 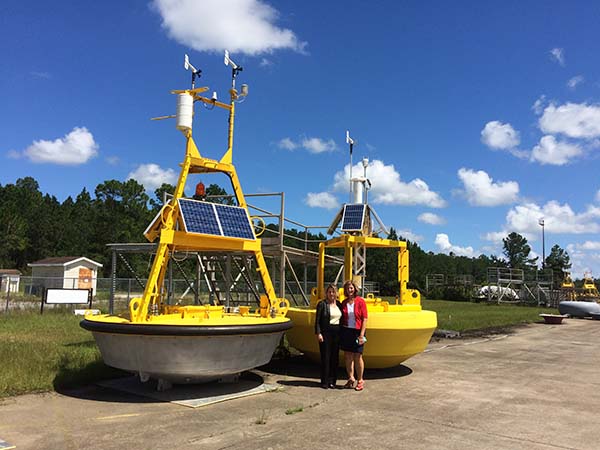 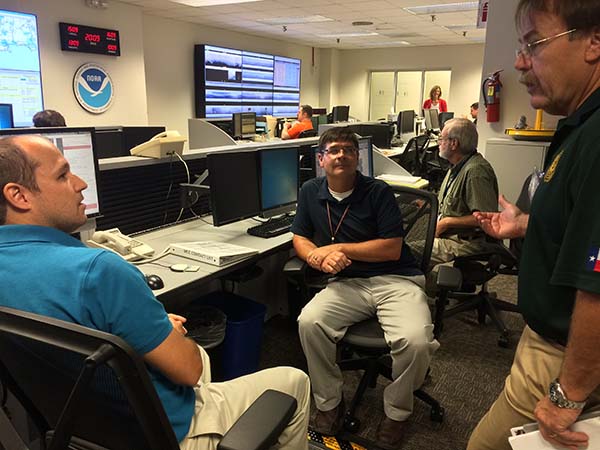 The panels sparked a number of intersting discussions, and the highlights include: 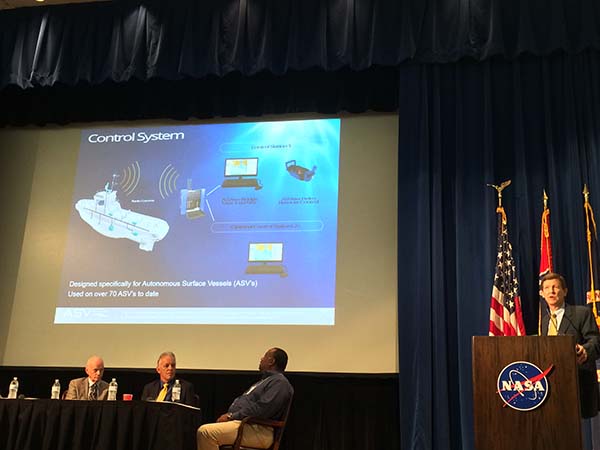 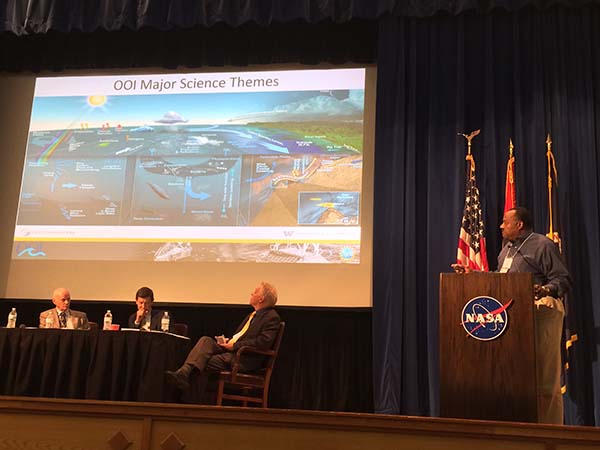 I participated on a panel on Gulf Coast Ocean Observing, moderated by Barb Kirkpatrick, GCOOS Executive Director. I focused on IOOS as a success; Deepwater Horizon and Refugio oil spill response; international context favorable for sustained observing; plea for coordinate messages (see Zdenka’s presentation here). I was joined by Dr. Ruth Perry, Shell Oil, who continues to remind us of the potential for partnering with industry and creative ways in which Shell is an active proponent of. Next up was Tim Osborne, NOAA, Navigation Manager, who spoke eloquently on the importance of IOOS and GCOOS as a framework for response and heartfelt stories of response to the recent Louisiana flooding. He was the hit of the panel. Our final speaker, Steve Buschang, Texas General Land Office, spoke about the Texas observing systems that are in place for oil spill response, his $1.2m research program and the importance of working with organizations like GCOOS so that he is making the best decisions on where to spend his resources. 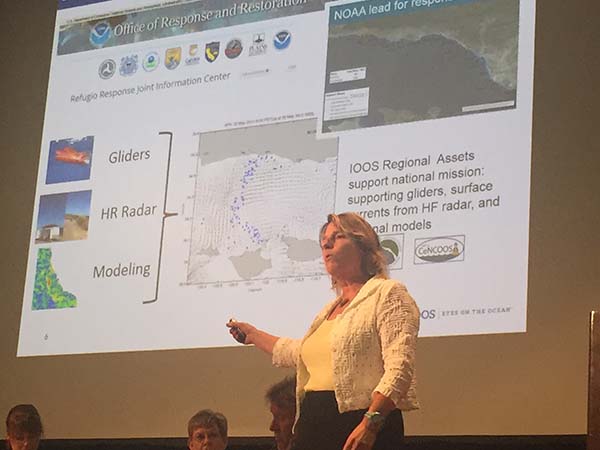 The final panel of the day was on the Blue Economy and was moderated by Dr. Monty Graham, University of Southern Mississippi, and I want to highlight two speakers as they truly represent the Ocean Enterprise. First Mike Cure, Bayou Caddy Fisheries, 3rd generation fisherman, talked about how the business has changed, the use of artificial reefs, the need to share the waters with the shrimpers and the challenges that occur. It always reminds me that ocean observing happens at the local level. Another aspect is how far the private sector imagery companies have come. For example, DigitalGlobe, represented on the panel by Richard Holmquist, has visual imagery of sufficient resolution to combat illegal fishing and document slavery on fishing vessels. Still expensive to use, but interesting to see the advances in the use of the imagery. 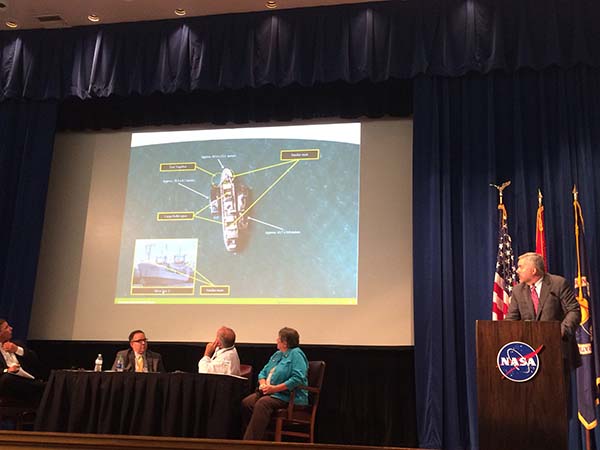 Richard Holmquist – describing the visual imagery that DigitalGlobe has in their inventory. Photo credit: NOAA/IOOS

As a reflective coda, it occurs to me that this year's conference, held near the Gulf Coast, presented a uniquely vivid reminder of the importance of sustained ocean observing. On one hand, I was staying at the newly rebuilt Bay Town Inn in Bay St. Louis, a place I stayed often while on active duty, that had been destroyed in Hurricane Katrina in 2005. Across the street from the rebuilt Inn is the owner's "Angel Tree."  When the Inn was ripped apart by a 40' tidal surge, the owner, her dog, and two friends climbed the tree and sheltered in it for hours until the storm subsided.  The tree saved their lives and when the Inn was rebuilt, she had the now-dead tree moved to it's current location and carved by an artist to represent it's final service.  The town continues to rebuild itself, a decade on from disaster, and even today there are still vacant lots along the waterfront. Juxtaposed with this is the awareness that our colleagues in Louisiana were coping with major flooding. During one conference session, my fellow panelist Tim Osborne, NOAA, stated that expanding the Gulf coast participation in GCOOS and IOOS overall is very important as the coast grows in population. As the coast changes, populations and infrastructure will grow in vulnerability and the need for more comprehensive coastal observations.  I could not agree more--sustained ocean observations are the backbone of coastal recovery and resilience.

The Angel Tree across from the Bay Town Inn. Photo credit: NOAA/IOOS

My sincere thanks to the organizers of this event and a shout out to Lauri Jugan, MSET, who has expanded the event to two days to focus on the Gulf Wide Ocean Enterprise.