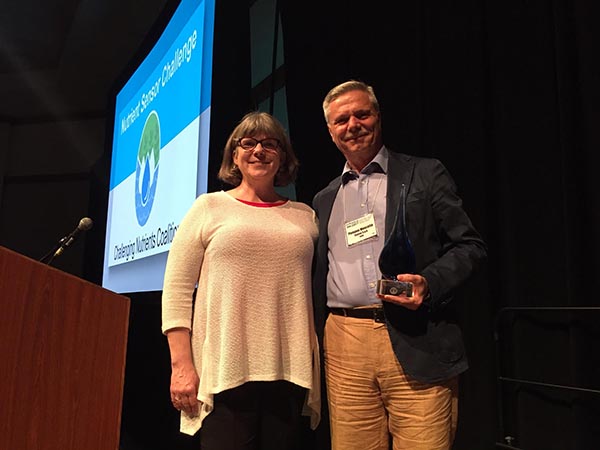 Denice Shaw of the EPA Office of Research and Development present the award to Pompeo Moscetta of Systea at the ASLO conference in Honolulu. Photo credit: Alliance for Coastal Technologies

Congratulations to Systea, S.p.A., winner of the Alliance for Coastal Technologies (ACT) Nutrient Sensor Challenge! Winners were announced yesterday at the Association for the Sciences of Limnology & Oceanographic Aquatic Sciences (ASLO) meeting in Hawaii. 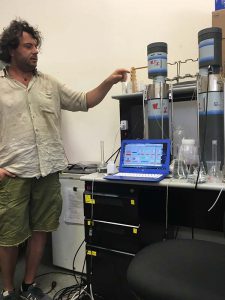 Systea S.p.A. tech explaining the technology for their sampling devices during the field testing phase in the Chesapeake Bay. Photo Credit: NOAA/IOOS

Systea was selected as the winner in both the nitrate and phosphate sensor categories by an independent judging panel. Their instruments represent a cost-effective, commercially available solution for measuring both nutrients in an integrated package. It uses a wet chemistry approach and performed well in lab testing and across the three field deployments, including 72 days in Chesapeake Bay.

An Honorable Mention for innovation and potential was also awarded to the National Oceanography Centre team whose work represents a fundamentally new approach to the wet chemical in situ analyzer method, using chip-based microfluidics technology. Their sensor is also forecast to be near the goal for purchase price. 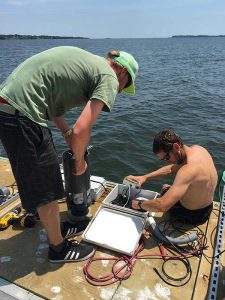 The Nutrient Sensor Challenge is a market-based competition designed to spur innovation by issuing a challenge to create sensors for measuring dissolved nitrate and/or phosphorous content with purchase price at or below US $5000. The idea is, if new sensors can be made available to the scientific community at an affordable price point, research and operational monitoring can expand and grow, which will improve our nation’s ability to manage risks to public safety and forecast coming events. Nutrient pollution—the overabundance of essential nutrients like nitrogen and phosphorous—costs the nation $2.2 billion dollars annually and threatens human and economic health. For example, phosphorus runoff into Lake Erie are responsible for algae blooms that that continually threaten the drinking water of communities along the lake’s coastline, including the closure of Toledo, Ohio’s water supply for 2 days in 2014.

Opened for applications in 2014, ACT developed and conducted the challenge with funding and support from U.S. IOOS, a member of the Challenging Nutrients Coalition under the White House Office of Science and Technology Policy. The beta testing phase took place in Summer/Fall 2015 and from there 6 teams moved to the verification phase which included deployments in fresh water (the Great Lakes), brackish water (the Chesapeake Bay) and salt water (Hawaii) through Summer/Fall 2016.

Congratulations to Systea, S.p.A., the National Centre for Oceanography and all the developers who rose to meet the Nutrient Sensor Challenge! Read more about it in the official announcement, or on the ACT website.