U.S. ATN: Expanding the Reach of Biology in Ocean Observations

U.S. ATN: Expanding the Reach of Biology in Ocean Observations 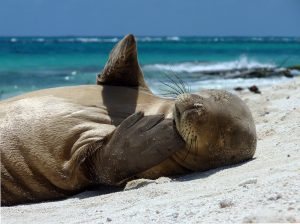 The U.S. Animal Telemetry Network (ATN) is a community-driven, interagency effort hosted by the U.S. Integrated Ocean Observing System (IOOS®) to coordinate animal telemetry tagging activities and share data across the U.S. Animal telemetry data is a valuable stream of information that offers a variety of benefits for the fields of biology and ocean observing. The data has numerous applications, from detecting changes in migratory routes and assessing habitat use, to assisting with marine mammal avoidance and improving abundance/population estimates.

Over the last four years — a relatively short amount of time — the ATN has developed an engaged community of practice that provides shared, integrated data and information, making it a go-to resource for NOAA, throughout the U.S., and internationally.

“Aligning national and regional interests and building strong relationships is foundational to our national network,” said Bill Woodward, U.S. ATN Coordinator. “With both ACT and FACT, we were able to provide support for new dedicated staff ‘data wranglers’ to actively recruit principal investigators (PIs) to submit their data and support data management and sharing, which in turn increases the amount of available telemetry data nationally.”

These partnerships remain an essential part of ATN. In 2020, the ATN launched a new program on Cape Cod, Massachusetts, with the Massachusetts Division of Marine Fisheries to track shark activity in the area and allow beach managers and lifeguards to opt in to texts alerting them of nearby sharks. Also this year, ACT and FACT teamed up with the Canadian Ocean Tracking Network to create a unified network of telemetry receivers from Canada to the Caribbean. Where researchers once had to retrieve their tag data from different networks, they can now access thousands of receivers directly via a single access point.

“Prior to ATN there was no user-friendly or publicly accessible medium to meet all of our needs,” said Dr. Brian Fadely of the Alaska Fisheries Science Center Marine Mammal Laboratory. “We can now easily point to datasets for viewing or sharing and compare tracks among species and researchers to facilitate collaboration. As more datasets become available the ATN will only become much more valuable as a resource to PIs, managers, other researchers, and the public.”