Home > Interests > Biodiversity and Ecosystems > Two Weeks Down Under

Two Weeks Down Under

Zdenka’s trip to Oz started with visiting the Integrated Marine Observing System (IMOS) in Perth, Australia. Two of IMOS’ facilities, the Australian National Facility for Ocean Gliders (ANFOG), and the Australian Coastal Ocean Radar Network (ACORN) are operated by the University of Western Australia, Perth, WA. Tim Moltmann, Director of IMOS and Zdenka had the chance to do a joint presentation that looked at the differences and similarities of the two systems. While the main focus may be different, at the end of the day, both systems are about sustaining ocean and coastal observing. Zdenka’s presentation can be found here. 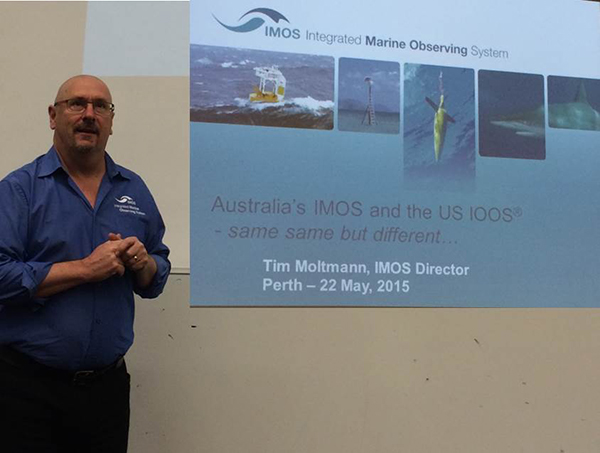 While in Perth, they met with Jan Flynn who, along with IMOS is planning the Australian Forum for Operational Oceanography (FOO). With generous support from the Australian Government Department of Industry and Science, planning for the first Australian Forum for Operational Oceanography Conference FOO 2015 is under way. They also met with the State government to discuss the importance of the partnership between the local government and IMOS.

They also met with the glider and HF radar teams. There are a lot of new things being learned with glider deployments. IMOS glider missions have revealed strong dense water cascades around Australia that have not been seen before. One difference between US and Australia glider deployments is “shark bites” – which are routine in Australia – where sharks actually strike at the gliders. The IMOS team marks the gliders for previous bites, much like you would note dings in a rental car, so they can determine which bites are new. 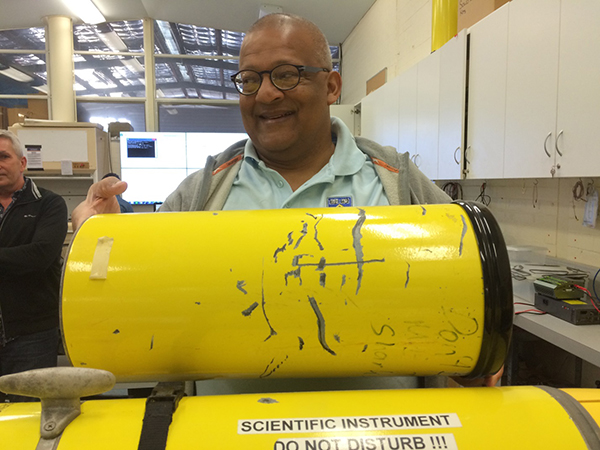 From the glider lab to out in the field, Tim and Zdenka visited the Fremantle HF Radar site. The antennas are along a public beach and the computer gear is in a repurposed shipping container. Notice the local artwork on the container, which allows it to become just a routine site and not attract unwanted attention. 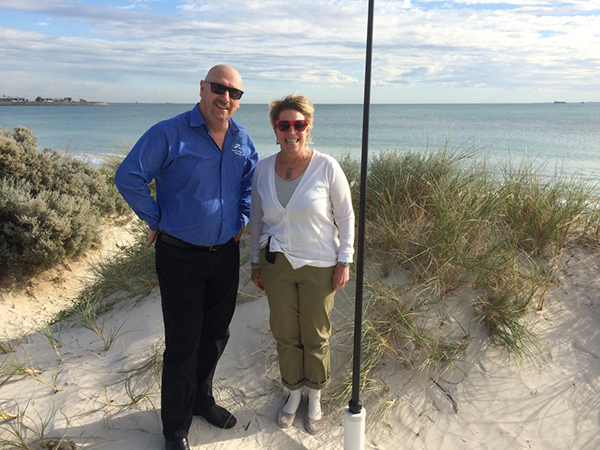 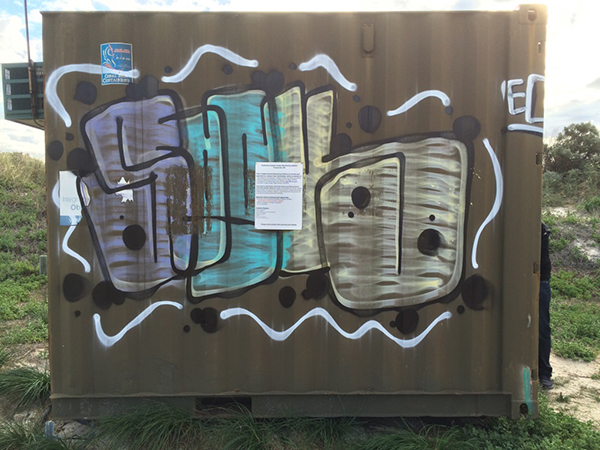 It was then off to Townsville, Australia and the wonderful hospitality of the Australian Marine Institute of Science for the Global Ocean Observing System (GOOS) Steering Committee meeting. The GOOS SC reviewed the progress of the three panels and welcomed the new chairs of the Biology and Ecosystem Panel with US IOOS’ own Sam Simmons, Marine Mammal Commission, as one of the co-chairs. The group also received an update on the GOOS project Tropical Pacific Observing System, and approved the Deep Ocean Observing System as a GOOS Project. 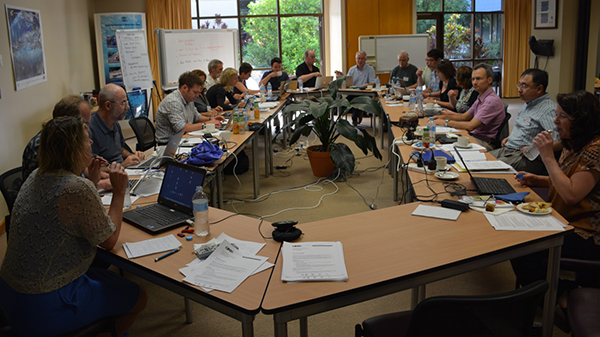 Zdenka represents the GOOS Regional Alliances as the GOOS Regional Council Chair. Zdenka briefed on the progress of the GRAs since the last GOOS meeting. The most exciting is the inventory of modeling capabilities. The purpose of this exercise is to produce an inventory of operational and pre-operational oceanographic modeling capability within the GOOS Regional Alliances, including physical, chemical, and ecological models. This questionnaire is intended to get basic information regarding the models and assign a basic categorization to the models based on accessibility of the data. We received model inventories from Black Sea GOOS, EUROGOOS, IOCARIBE, IOGOOS, MONGOOS, IMOS, PI-GOOS, SEAGOOS, and U.S. IOOS. OCEATLAN and GRASP indicated they are not running any operational models at this time. The majority of the models being run are ocean circulation (ROMS, HYCOM, MOM4, etc. ) and wave forecasting (SWAN, WW3, etc. ) models. Thank you to EUROGOOS who have visualized the inventory. Check it out here. 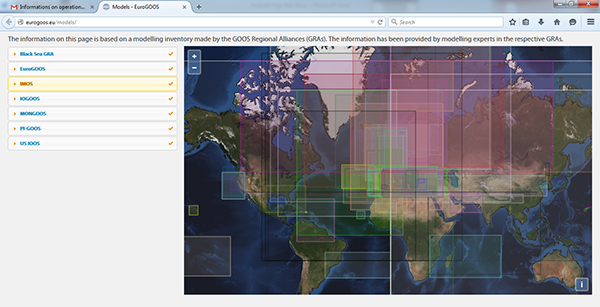 The final stop was Cairns for the Group on Earth Observation (GEO) Blue Planet Symposium. Blue Planet is the collective grouping of the ocean and coastal tasks within GEO to show the importance of all of these tasks to all of the Societal Benefit Areas. Blue Planet is divided into 6 components that range from the observing systems, modeling, services and capacity building. All talks were given in plenary, including full talks and five minute speed talks. Zdenka spoke on both US IOOS and a speed talk on HF Radar, which have been posted. Eric Lindstrom, NASA, talked about the importance of remote sensing for ocean observing. John Gunn, GOOS Co-Chair as well as the panel chairs of the physical, biogeochemical and biology and ecosystem panels provided an introduction to GOOS. Sam Simmons briefed on the US IOOS Biological Task Team efforts which marry up nicely with the GOOS efforts to determine essential ocean variables. PacIOOS got a shout out during Naver Juria, NOAA National Weather Service’s briefing on Early Warning of Inundation in the Marshall Islands and CariCOOS got a shout out from Doug Wilson on the design of a GEO Coastal Ocean Pilot Project for the Caribbean Region. 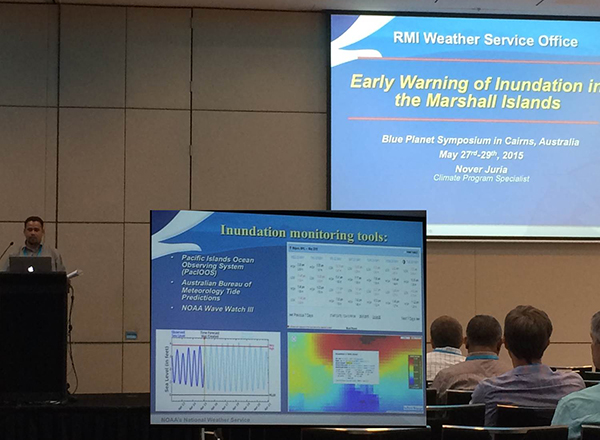 All of the presentations will be posted soon at http://blueplanetsymposium.com/2015symposium.html.

Finally on a fun note, the IMOS and CISRO colleagues have worked with LEGO® to make gliders with LEGOs - so now we have small fleet at the IOOS Program Office. 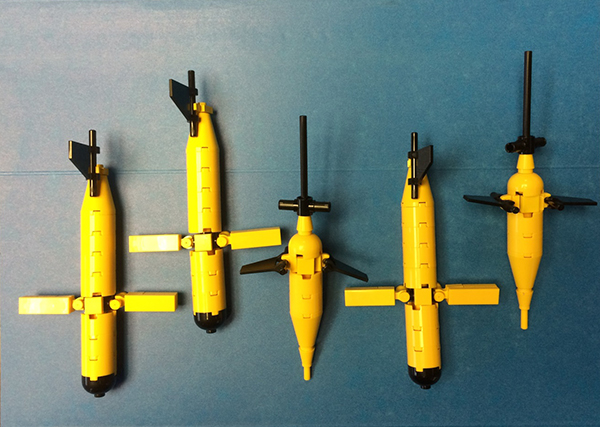