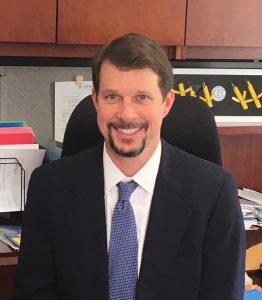 Carl Gouldman assumes the Directorship at U.S. IOOS on February 5, 2017.

The U.S. IOOS Program Office is proud to announce that Carl Gouldman is stepping up into the role of Director for the U.S. Integrated Ocean Observing System (IOOS®).

Carl is well-known to the IOOS community, having served as deputy of U.S. IOOS since 2014, managing the daily operations associated with NOAA’s lead federal agency role in implementing the U.S IOOS as called for in the Integrated Coastal and Ocean Observation System Act of 2009.

"I am happy to hand over the reins of U.S. IOOS to Carl," said Zdenka Willis, former director. "Carl has been with IOOS since the earliest days and led numerous key events in IOOS history, including the 2012 Summit and 2016's 'Ocean Enterprise Study.' I know this vital national effort is in good hands."

Carl joined NOAA in 2000 as a program coordinator at NOAA’s Coastal Services Center and then spent a year at NOS headquarters staffing the NOAA Ocean Council during the 2003-2004 NOAA review of the U.S. Commission on Ocean Policy Report. He joined the IOOS program full time in 2004 as the first IOOS permanent employee.

"I'm excited to step into the director position at IOOS," said Carl. "U.S. IOOS has accomplished a lot since its inception, and I'm looking forward to continuing it's evolution and working with the dynamic and talented team in the Program Office, the Regional Associations, the interagency ocean observation committee, the IOOS Advisory Committee and all our peers and partners. IOOS is our eyes on the ocean."