Home > Interests > Climate > Exploring the Ocean with the Power of Waves

Exploring the Ocean with the Power of Waves 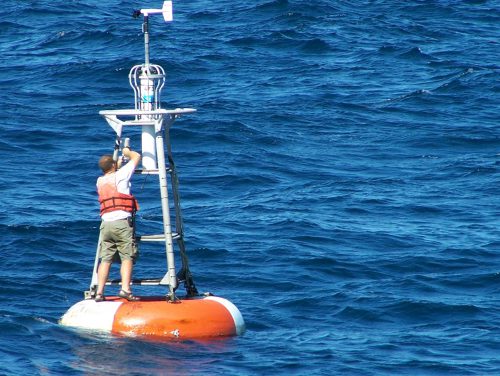 The value of collecting ocean data is nearly as infinite as the ocean is vast. Capturing marine data is critical for improved marine resource management, better tracking and forecasting of tropical storms and ocean temperature changes, and the advanced monitoring of fish stocks that nourish entire communities.

Marine research has been growing in financial value for years. The 400 U.S. businesses in this field collect roughly $7 billion in annual revenues, and globally, the sales of navigational and ocean survey instruments doubled between 2001 and 2011, expanding from $7.5 billion in sales to $16 billion. Demand for these devices is growing, and with 80% of the ocean still unexplored, the market is ripe for expansion.

However, keeping the power flowing to these devices is a barrier to expansion and exploration. The research tools needed to conduct data collection in the ocean are typically battery powered. And as all batteries must be charged, the costs and challenges associated with system maintenance, repair, and upgrades can be problematic for those that operate far offshore or deep underwater.

The current energy limitations of ocean observing technologies often relegate ocean scientists to difficult choices that could result in compromising their sensors—how much data they collect, and how often scientists communicate that data back to the platform or to shore. For years, researchers have worked to optimize ocean observation devices to combat this problem, making strides in both reduction of operational costs and extension of battery life.

But what if batteries were taken out of the equation and these ocean tools were powered by the ocean itself?

Marine energy could also facilitate the underwater charging of unmanned underwater vehicles, allowing for the operation of a larger fleet of such vehicles. Platforms could be optimized to collect and transmit larger volumes of data while vastly reducing the amount of costly ship time required for maintenance operations.

At left, this profiling glider increases the value of data that is collected and provides the ability to direct the glider to areas of interest, rather than collect data from a single site near shore. (Source: National Ocean Service Website.) At right, a solar powered glider for Ocean Acidification research in the Arctic.

Much like the ocean itself, the possibilities in this area are endless. In October 2018, a team of engineers and scientists put this notion to the test at the U.S. Navy’s Wave Energy Test Site in Hawaii. Researchers from the Applied Research Laboratory at the University of Hawaii, with funding from the Naval Facilities Engineering and Expeditionary Warfare Center and in partnership with the University of Washington, Fred. Olsen., and Sea Engineering, Inc., initiated a second round of testing of the Fred. Olsen BOLT Lifesaver wave energy converter (WEC) device.

The device converts ocean waves to electrical power with three power take-off units and the use of rotary electrical generators, storing the produced energy in a battery bank. The device was not tethered to shore and enabled data collection for a period of three-and-a-half months.

A primary goal of the test was to demonstrate the viability of alternative means of powering ocean instruments without relying on utility-supplied grid power or single-use batteries.

Scientists tested the Wave-powered Adaptable Monitoring Package (WAMP) designed by the Applied Physics Laboratory and Mechanical Engineering Department of the University of Washington. It provided underwater sensing and included a demonstration of a prototype wireless-through-seawater charging system for autonomous underwater vehicles, designed by WiBotic. The 600-watt WAMP system was powered by the Lifesaver WEC device.

The researchers found that the WAMP system was operational for 100% of the 108-day period of deployment, keeping the monitoring instruments and computer in operation for 84% of that time.

“If this were powered by battery, it would have been operational less than 1% of the time,” said Pat Cross, University of Hawaii.

This test was the world’s first demonstration of both uninterrupted ocean observation and an underwater vehicle recharge system powered by the ocean waves.

“The craziest thing about it was that it actually worked!” Cross said.

To encourage innovators in this space to “think blue,” NOAA is teaming up with the U.S. Department of Energy to present the $3 million Ocean Observing Prize, which is designed to grow the blue economy and accelerate the development of the marine energy sector.

The prize challenges innovators to integrate marine energy into unmanned vehicles; buoys, floats, and tags; ocean communications and underwater navigation; and in extreme environments, such as deep-sea and polar regions.

By further developing these marine energy technologies and pairing them with ocean observation devices, we can arm researchers with tools that can access new environments, last longer, cost less to power, provide better resolution and data collection, and overall, ensure a successful mission both above and beneath the waves.