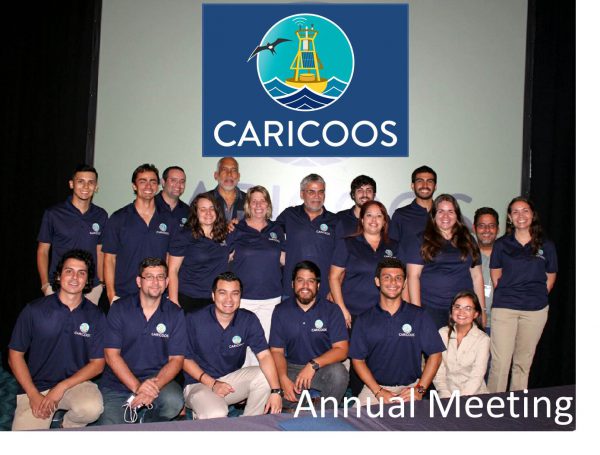 The CariCOOS General Assembly took place at the end of April at the Puerto Rico Convention Center in sunny San Juan, Puerto Rico.

Taking a page from IOOS’ Ignite sessions at the MTS/IEEE Oceans conferences, the first evening drew a crowd of 80 as CariCOOS dazzled the audience with a lightning round of science updates. The Ignite-style of presentations is 20 slides that advance automatically, timed to a precise 5 minutes, which keeps presenters on their game and audiences on their toes! 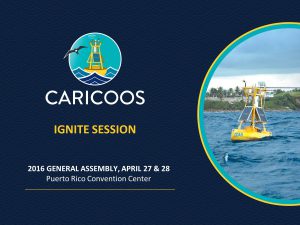 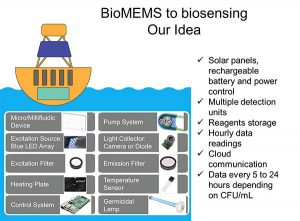 Topics ranged widely: from waves to new water quality forecasts, BioMEMS to bio-sensing and larval transport, MPAs in Jobos Bay NEERS to HF Radar and modeling for alternative energy.  The content provided an excellent overview of the island front of both Puerto Rico and the United States Virgin Islands! 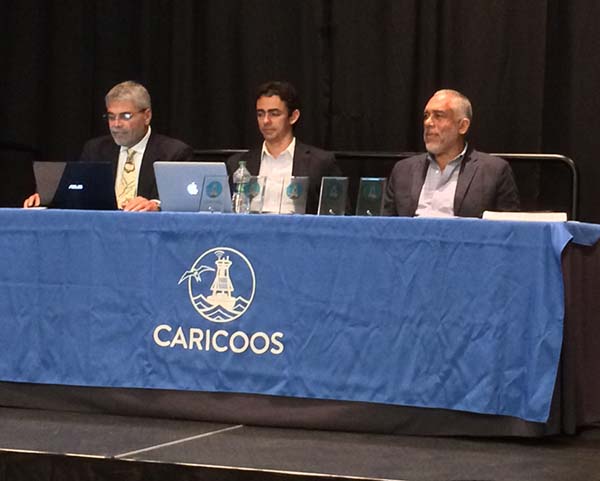 Following the Ignite icebreaker, CariCOOS Executive Director Julio Morell opened the meeting by reflecting on the success for the last 5 years and ambitions for the next 5. CariCOOS, Inc. was formally launched and the website (caricoos.org) is awesome. The design philosophy targets mobile use and speed and CariCOOS awarded Candela Inc., the developer of site, the CariCOOS award.  Bravo Zulu to the entire CariCOOS team! 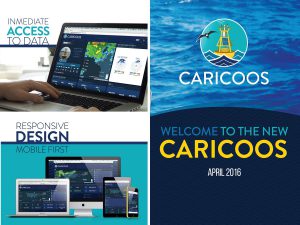 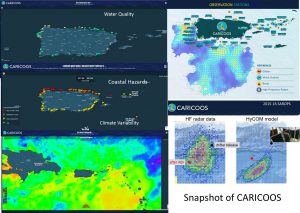 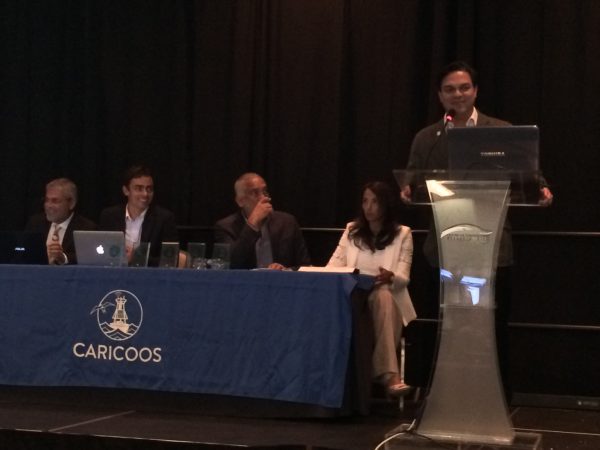 Hon. Carmen Guerrero Pérez, Secretary of Department of National Resources, and CariCOOS signed a memorandum of agreement to formalize the relationship between Jobos Bay National Estuarine Research Reserve (NERRS) and CariCOOS. “I am truly honored to be part of this historical agreement. CariCOOS has shown extraordinary achievements and impacts of their research.” She further stated that, by cementing this relationship, CariCOOS and Jobos Bay can implement the use of new oceanographic technology, and together use that information to educate the people of Puerto Rico. 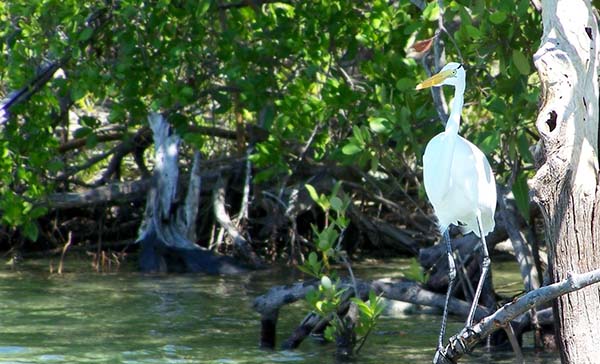 Tackling the high-priority issue of improving hurricane forecasting, Gustavo Goni, director of Physical Oceanography at NOAA’s AOML, has been working with CariCOOS on a multinational, multidisciplinary plan to understand effect of the ocean on hurricane intensity, which has involved glider operations in the region. Bottom line up front - temperature and salinity in the upper ocean matters in forecasting hurricane intensity. Further in the 4 missions, 15 months, they have collected 10,000 temperature and salinity profiles, thus establishing the baseline. Gustavo showed data plots of with and without glider data. With glider data there is almost 100% elimination of the pressure error and 50% elimination of the wind error. 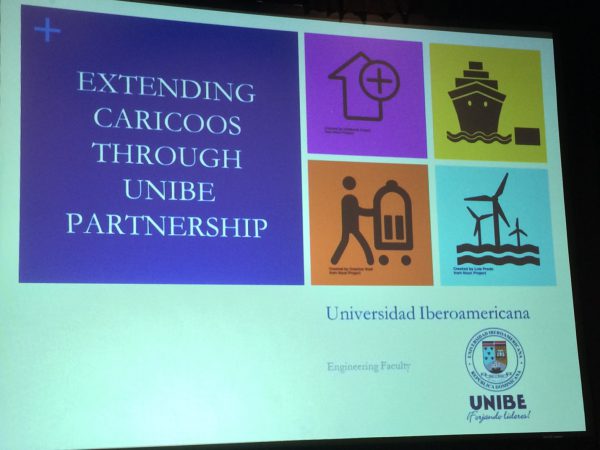 Thanks to the United States Coast Guard for the joint project to deploy drifters so that CariCOOS could validate their models and HF Radar systems. Thanks to the United States Army Corps of Engineers, Jose Sanchez, Director, Coastal and Hydraulics Laboratory, for his briefing at CariCOOS and willingness to explore new partnerships. As he said – it is all about sediment. Thank you to Kyle Ward, NOAA’s Office for Coast Survey who briefed on the National Ocean Service (NOS) Next Generation Navigation project in Los Angeles/Long Beach. Kyle was also impressed with the new website! Thank you Kyle. CariCOOS works closely with NOAA’s Weather Forecast Office to provide height of breaking waves at 6 beaches around Puerto Rico. CariCOOS, through Sea Grant, has a long partnership with Surfrider and now, through their new website, can show their beach reports in an easy-to-understand way. 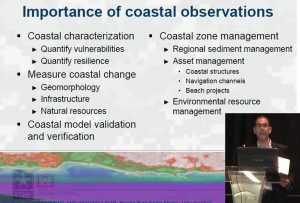 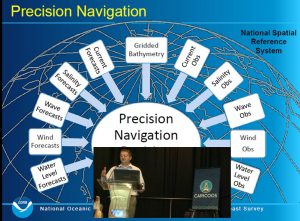 Through the years, IOOS has been proud to provide more than 60% of CariCOOS’ funding, but they have been successful in gathering over $2M in additional funding via partnerships with Sea Grant, industry partners, Caribbean fisheries council, NOAA Ocean Acidification Program (OAP), Atlantic Oceanographic & Meterological Laboratory (AOML), National Science Foundation (NSF), and U.S. IOOS Coastal and Ocean Modeling Testbed (COMT). Julio also gave a shout out to the University of Puerto Rico for their in-kind support to CariCOOS and partnership as their fiscal Agency.

A key player in Caribbean ocean observing, CariCOOS is reaching out across the islands, extending partnerships with the Dominican Republic, Saba & Netherlands Antilles, and the British Virgin Islands to grow the network of observations and observing capabilities. As Julio said: the currents know no boundaries, so why should there be boundaries in our ocean observing systems? 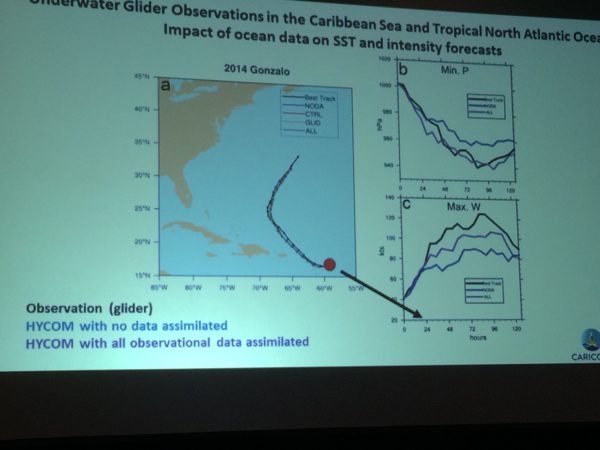 The Assistant Administrator of the National Ocean Service (NOS) started a Coastal Round Table to bring together the NOAA programs that operate with partnerships at the coast and the CariCOOS meeting really showed that in Puerto Rico the Coastal Round Table works every day. Once again it was my pleasure to provide a U.S. IOOS overview, and I truly appreciate the hospitality of the CariCOOS team and partners who make me feel so welcome.