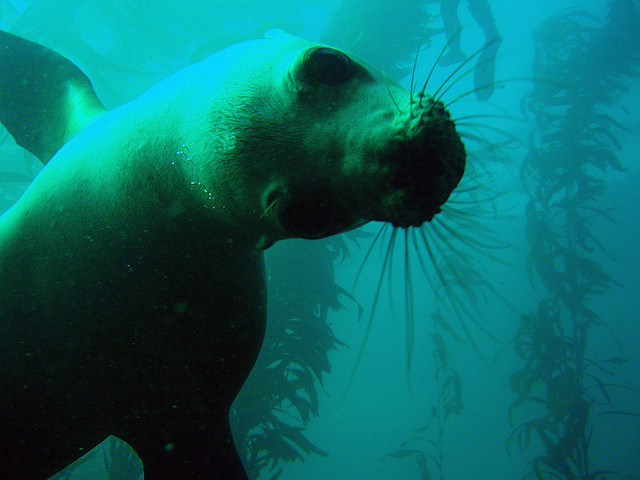 A sea lion poses for the camera in the waters off of California.

The The White House Office of Science and Technology Policy has released the U.S. Animal Telemetry Network Implementation Plan, a blueprint for coordinating aquatic animal telemetry research, operations, and data management in the U.S.

Animal telemetry is an important and versatile observing practice and includes a wide range of animals, from tiny smolts to sea turtles, birds, and whales. Not only are we able to learn information about animal populations, movements, and behavioral patterns, animal telemetry can also capture physical oceanographic and atmospheric data as they travel through the ocean. These data help scientists learn about habitats, identify ocean features, and monitor parts of the ocean that are difficult or expensive using other observing methods. This valuable data is collected all over the U.S., but is often independently maintained and stored, which complicates access and wider research with multiple data sets. With this plan for implementation, the Animal Telemetry Network Task Team is recommending best practices and data standards designed to build an integrated, connected network to better serve societal needs.

The concepts for a U.S. National Animal Telemetry Network were developed through two community Workshops in 2011 and 2012 and were further refined by a focused team of marine animal telemetry scientists. The planning efforts of this Animal Telemetry Network Task Team of the Interagency Ocean Observations Committee which is organized under the National Science and Technology Council, have culminated in the Animal Telemetry Network Implementation Plan 2016-2021, a summary outlay of a preliminary design for coordinating marine animal telemetry research, operations, and data management across the United States. This document which responds to recommendations within the National Ocean Policy concerning the development of ocean biological variables, as well as to those developed by the United States ocean observing community during the U.S. IOOS Summit identifying the need to more effectively integrate biological and ecosystem observations into ocean and coastal information systems, was approved and signed by the White House Office of Science and Technology Policy (OSTP) on December 22, 2016 and subsequently released to the public.