Shellfish play a vital role in the environment, culture, and economy in many U.S. coastal communities.  The shellfish aquaculture community is the largest segment of marine aquaculture in the United States.  Several thousand small farms nationwide harvest over $600 million worth of sustainable shellfish while providing tens of thousands of jobs in rural coastal communities.

In 2005, production at some Pacific Northwest oyster hatcheries began declining at an alarming rate, posing severe economic impact and challenging a way of life held by shellfish growers for over 130 years.  By 2008, oyster losses at the largest oyster hatchery on the West Coast reached 80 percent.

In 2010, NOAA scientists determined corrosive water was killing the oyster larvae.  Corrosive water enters the bays and inlets, where the Pacific Northwest hatcheries operate, at certain times of the year—usually in summer, and specifically on days when winds from the northwest caused upwelling of deeper water, which is more acidic than surface water.

Ocean acidification refers to the on-going change in the chemistry of the ocean caused primarily by the ocean’s absorption of carbon dioxide from the atmosphere.  The ocean generally has an alkaline pH, but as the ocean continues to absorb carbon dioxide it has become more acidic.  As the ocean becomes more acidic, carbonite based minerals such as calcium carbonate, important for shellfish development and survival, are reduced.

Shellfish farmers are increasingly dependent on real-time monitoring to know when corrosive waters may challenge the development of shellfish.  Without data from monitoring equipment, shellfish growers have no way to assess how the chemical make-up of the water will affect shellfish productivity, thus growers cannot adapt their aquaculture practices to minimize impacts from ocean acidification.

The following is a summary and status for each of the five activities: 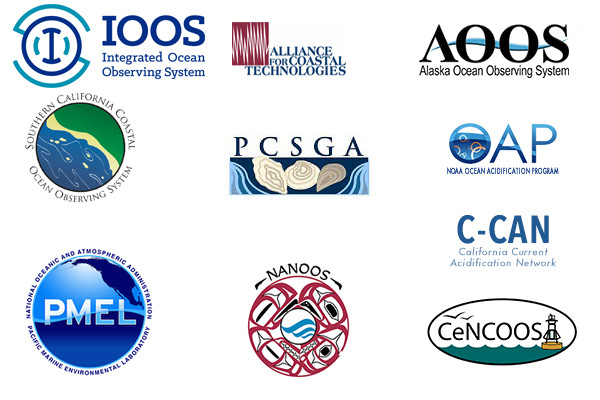