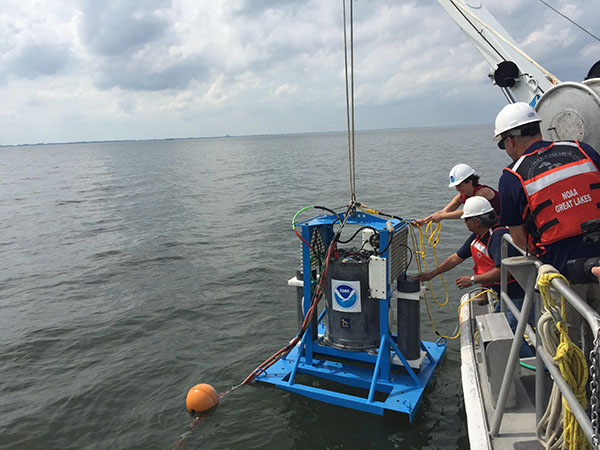 The ESPniagara, ready for deployment at the start of HAB season 2017. ESPs, or Environmental Sample Processors, were sponsored from development to operations by a previous OTT grant. Photo: NOAA/GLERL

The project will expand the capabilities of the existing in-water monitoring network (LEHABS-EWS) by the:

Cleveland Water Alliance (CWA) identified utilities, cities, counties, and other institutional and private organizations that are potentially willing to support the harmful algal bloom warning and observing system. Some of the targeted stakeholders include:

LimnoTech inventoried all known HABs monitoring programs on Lake Erie, which includes a listing of monitoring activities and assets.

McLane Research Labs received a formal purchase order for building the 2G ESPs in late March; they expect to deliver them around the end of September. Because of late arrival of ESP components, NOAA GLERL will use the fall and winter period for training and deploy the IOOS ESP in summer 2019.

Two deployments of ESP#1 (a.k.a. ESPniagara) were conducted during summer 2018, with mooring located upstream of Toledo, OH water intake crib: 19 July – 9 Aug.; 30 Aug. – 11 Oct. The first deployment yielded several positive ‘hits’ for microcystin, with a maximum value of ~1 µg/L reported on 2 Aug; however, due to a software issue compromising extract delivery to the ESP microcystin sensor, most of the 15 deep/shallow paired samples registered as non-detect and accuracy of toxin values reported was uncertain.  The second deployment was fully successful, with no hardware/software issues. As of 3 Oct., data for 18 deep/shallow paired samples (plus one initial unpaired shallow sample) were reported with a total of 21 positive ‘hits’ for microcystin (range: 0.18 – 6.0 µg/L) and 16 non-detects (Fig. 2).

ESP data were reported on GLERL’s HABs and Hypoxia website.

Based on the water treatment plant feedback complied and reported by CWA and LimnoTech, GLOS staff decided to change the scope of the data delivery products for this project. The primary message we received from the water treatment plant operators/technicians is that they want actionable data coming to them in form of a notification on their smart device prompting them to more closely monitor their water quality controls or react to a potential risk to their water supply. They don’t want to be constantly monitoring a data portal in addition to all their treatment plant controls. Therefore, GLOS is moving away from building and enhancing the current HABs data portal and related products. Instead, GLOS is prototyping the EWS back-end infrastructure needed to automate the input of data from a monitoring device, process and deliver real-time water quality data and alters to drinking water utilities. The EWS prototype development is currently underway. GLOS contract RPS to design and develop the prototype.

GLOS led and managed the development of the Lake Erie Early Warning System prototype. The first phase of the development involved collaborating with our OTT partners - CIGLR and NOAA to come up with the requirements for the prototype. The primary objective for the first phase of the prototype was to establish a notification system to alert the registered users about the changing conditions in Lake Erie. A sonde was configured for demonstration purposes and a backend process was set up to send a text alert to a registered phone number via SMS. A light weight front end system was also developed to present HABS related information from the real time sensors in Lake Erie. Another backend process was developed to stream the data from the real time sensors to be presented on the front end. This capability was demonstrated at IAGLR conference. Beginning in August, the second phase focused on enhancing the capabilities of the prototype - including more data sources into the application, redesigning the front end and extending the streaming capability to most of the real time sensors. Backend processes were set up to ingest three new data sources into the system - CIGLR monitoring field samples, NOAA Experimental HABS Nowcast model data, and GLCFS nowcast data - wind and current data. Streaming capability of the real time sensors was extended to 12 of the stations. One of these stations was configured for alerts for demonstration and testing. GLOS led the design of the front end for phase 2 and managed the development of the application. GLOS is collaborating with the Cooperative Institute for Great Lakes Research to plan and implement the testing of this Beta version of the application.

The lander systems for the two new ESPs were delivered and battery packs were constructed and wired to the lander systems. Design and confirmation of the microcystin-saxitoxin (MC-STX) multiplexed assay continued which included a new higher density array configuration. The microcystin toxin array was modified to further improve stability during field deployments. Filtration pucks were delivered, however, proper QA/QC was not performed by the manufacturer, these were tested; filtration pucks that did not meet our QA/QC criteria were returned to the manufacturer for design correction. Field deployment locations were established and boats were reserved for the 2019 bloom season.

During the active cyanobacteria bloom period in western Lake Erie in 2019, NOAA-GLERL and NCCOS deployed three ESP toxin detection systems (ESPniagara, ESPnessie, and ESPrush) upstream from the Toledo water intake. All three ESPs carried a sensor for detecting the cyanotoxin, microcystin. These deployments included successful missions for the two new ESP systems (ESPnessie and ESPrush). Initial checkout procedures for the two new ESPs identified several system malfunctions, which needed to be corrected prior to deployment and caused set-backs in establishing and occupying a secondary ESP site. Both systems received full mechanical and microcystin sensor calibrations and passed QA/QC evaluations prior to deployment. The ESP systems were deployed continuously near the Toledo water intake on a rotating basis from July 17 until September 25, 2019, providing continuous microcystin concentration data to the scientific community. During the deployment period, the ESPs measured and reported particulate microcystin concentrations in near-real time, twice a day, from two water depths (approximately 1 m above the lake bottom and 1 m below the lake surface). The ESP systems effectively captured the high toxin period of the bloom, identifying microcystin concentrations as high as 3.97 μg L- 1, as well as detecting the end of the toxic period of the bloom (after September 8, 2019).

Microcystin data from the deployments are available on GLERL’s website and are currently being transitioned to the GLOS HAB portal. New protocols for timely and accurate ESP data dissemination to GLOS are being pursued and

CWA supported the OSU survey on ‘willingness to pay’ question with both Max Herzog and Bryan Stubbs serving as CWA lead for this work. Building upon several key items for year 2 including, 1) Reviewing year 1 existing funding mechanisms both in US and abroad, 2) working with GLOS to better understanding their vision for ‘ownership’ along with federal long term funding opportunities, 3) Providing input into OSU survey to understanding usage, needs, and funding opportunities to the broader stakeholders as they become defined, 4) continue to work with utilities in partnership with GLOS to solidify both data sharing, asset ownership, and funding opportunities, and 5) as prototype EWS becomes operational, understand how EWS will be used, who will be able to leverage or develop ‘products’ from EWS, and explore additional funding opportunities.

GLOS reorganized the Year 2 scope of IOOS HABs OTT project to better reflect the changes GLOS made internally to its data management program. As of 2019, GLOS migrated all the data and data flow processes into the Cloud using Amazon Web Services and hired dedicated in-house staff for data management. 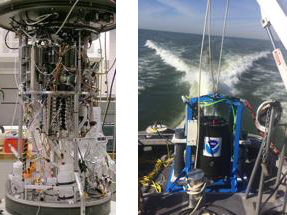 The GLOS technical team spent time evaluating the EWS prototype and assembling technical requirements for the EWS minimum viable product (MVP) development. Four observations were made based on stakeholder’s quantitative evaluations of the prototype: 1) Purpose of the overall application was well received; 2) Ability to see lake view data seems to be useful; 3) Idea of receiving alerts on mobile phone was appreciated and 4) Station page data well received. This feedback from the beta testers was folded into the requirements gathering effort for technology platform that GLOS is developing. Some of major ‘lessons learned’ as a result of the prototype include: being able to support streaming, real-time data from a variety of sensors and devices could be improved and expanded to adequately handle a larger load, easy registration of new devices and sensors would be helpful to users seeking to deploy new devices to capture data, accessing results from automated processing of complex data into valuable information and portraying that in an easy to use, web & mobile application would make this product more valuable to end users, and being able to configure and customize the alerts, thresholds and dashboard display of this information would increase an end users likelihood of being a consistent consumer of the system. These user needs have been incorporated into the business and functional requirements of the new technology platform.

COVID-19 adjustments caused some modest delays in publishing and receiving responses to the RFP for the GLOS IT platform developer. An EWS MVP, based on the new technology platform, is scheduled to be ready by September 2020. It is planned to include all the benefits that the beta users from the initial prototype identified and lay the groundwork for an operational EWS sometime in 2021.

Once the 2019 ESP deployments concluded, the systems were cleaned, maintained, and prepared for continued evaluation and optimization of toxin extraction efficiency during the non-bloom season. These operations included general maintenance (replacing o-rings and fluid lines) and cleaning of the ESP, ESP lander, and other external components. Several modifications and calibrations were conducted during the first quarter including adjusting cameras and recalibration of fluid syringes. Extraction efficiency experiments were conducted from November – January and results are being analyzed. We are currently experiencing a fluid retention issue not observed previously and are troubleshooting the machines to address the problem. Monterey Bay Aquarium Research Institute (MBARI) and NCCOS are assisting in troubleshooting the instruments remotely and if the issues cannot be resolved, MBARI has scheduled a training and in-depth maintenance visit to GLERL in April. NCCOS is also testing a new protein stabilizing reagent with the aim of continuing to improve long-term stability of protein arrays used in the MC sensor. We are currently waiting on a developer to be selected to determine how data will be imported and visually displayed into the HABs Early Warning System operated by GLOS. This is a critical need for establishing timely, clear, and accurate display and dissemination of the ESPs’ near-real time toxin data to stakeholders.

From July to early September, Ohio State University administered the survey to multiple populations. A team of research assistants conducted in-person data collection throughout the summer to target visitors to the Lake Erie Shores and Islands (final data collection occurred on September 7th). Lakeside residents were sampled through an online Qualtrics panel of residents living in the zip codes that were within 30 miles of the lake shore. Multiple listserves were created to capture lake and lakeside businesses, decision makers and the media, with data collection occurring between August 12th and September 4th. Focus groups were organized by SeaGrant. The survey data was analyzed and summarized in a report that has been provided to GLOS.

CWA been working actively with OSU and its survey instrument on ‘willingness to pay’ question, proving guidance, coordination, and working with survey team on results as they relate to the question of ‘willingness to pay’ as it relates to the project goals. Moving into q2 of 2020 CWA focus on key takeaways in coordination with GLOS to better understanding their vision for ‘ownership’ along with federal long-term funding opportunities in addition to industry driven funding partnerships. Further, CWA will work on distilling ‘real world’ opportunities from the feedback of the OSU survey instrument … usage, needs, and funding opportunities to the broader stakeholders as they are now better defined.

LimnoTech prepared and submitted to GLOS an optimized system design document including capital/O&M costs. GLOS is reviewing it. With the change in scope (i.e., the development a prototype EWS in Year 2), the project team will review the draft optimized system design in Year 3, pulling elements of it into the final EWS operational plan.