There is considerable interest in the offshore exploration, and possible development, of hydrocarbon resources in Alaska’s Chukchi and Beaufort shelf seas. Drilling activity can only proceed during the open water season, with the extent of that season dictated by sea ice formation, as determined by federal permitting agencies. Federal agencies and the oil and gas industry require an accurate method of predicting sea ice formation since a premature or delayed cessation of marine operations based on inaccuracies in either model predictions or satellite detection of sea ice formation could be costly and have implications for the safety of offshore operations. The National Weather Service (NWS) and NOAA are tasked to develop sea ice prediction models having an unprecedented ability to forecast accurately the onset of sea-ice formation. This process is difficult because such forecasts require knowing the vertical temperature and salinity structure (the stratification) of the shelf and how this evolves as a function of air-sea heat fluxes. 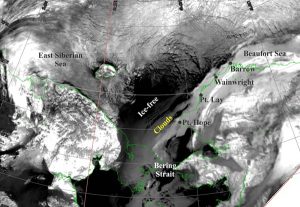 In 2014, the University of Alaska Fairbanks was awarded a three year grant to develop and test an economical sensor package, using existing sensors in a new manner, for operational use by a variety of stakeholders needing accurate predictions of the onset of fall ice formation. The sensor system serves several purposes. First, it provides real-time data on the vertical temperature and salinity structure of the shelf so that agency permitting agencies, and stakeholders, including the oil and gas industry and subsistence users, will know when offshore sea ice formation begins. Second, the data can be used to evaluate and refine NOAA and NWS sea ice forecast models (both existing models and those under development), which depend upon accurately predicting the seasonal evolution of the thermohaline structure of the ocean. Third, the data obtained from this sensor system could be useful in guiding remote sensing algorithms for frazil ice detection, a notoriously difficult process for remote sensing platforms.

The sensor package includes temperature/conductivity/pressure CTD recorders that record internally and transmit data (via a conducting wire) to a small surface buoy. The mooring will also have an acoustic release connected to an anchor and sub-surface flotation (positioned midway along the mooring wire). The surface buoy package will include a thermistor, a GPS sensor, and an Iridium communications system for transmitting the data to shore in real-time. The CTDs (deployed at nominal depths of 8, 20, 30 and 40 m) allow knowing when the entire water column is at the freezing point at which time further cooling will induce frazil ice formation.