Coastal and offshore shelf waters of the Northeast United States are seeing fluctuations in the levels of dissolved inorganic nutrients, driven principally by human caused nutrient loading near shore and oceanographic processes farther offshore.  Anthropogenic inputs near-shore lead to eutrophication and associated hypoxia, habitat loss, and degraded aesthetic value. Changes in nutrients offshore appear to be occurring due to climate change, and are a key factor influencing development of Alexandrium harmful algal blooms, which cause Paralytic Shellfish poisoning.   Supportive data with which to wisely assess and manage these nutrient fluxes in New England waters remain lacking. These data can only be delivered by an effective coastal nutrient observatory. Recent advances in nutrient sensor technologies, coupled with considerable leverage from ongoing coastal ocean observing programs, now make this possible for the first time, anywhere in the world. 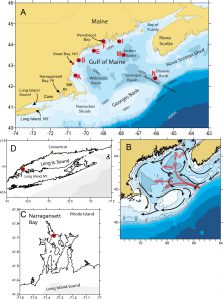 In 2014, IOOS’ Ocean Technology Transition Project awarded a three year grant to the Northeast Atlantic Coastal and Ocean Observing System (NERACOOS) to develop an integrated nutrient observatory capable of resolving nutrient dynamics at temporal and spatial scales necessary to address critical needs of stakeholders throughout the Northeast region of the United States.

As part of the this project, fifteen (15) new and two (2) refurbished Satlantic SUNA (Submersible Ultraviolet Nitrate [NO3] Analyzer) v2 sensors will be integrated on current NERACOOS mooring assets in western Long Island Sound, upper Narragansett Bay, Great Bay in New Hampshire, Massachusetts Bay, 3 sites along the coastal shelf of the Gulf of Maine, at four depths in Jordan Basin in the interior Gulf, and at one depth in the Northeast Channel, between Georges and Browns Bank. In addition, three (3) new and one refurbished WET Labs Cycle-PO4 and four (4) WET Labs Cycle-NH4 sensors will be deployed at the near-shore sites listed above. Each of these sites has specific environmental concerns with strongly invested stakeholders. The goal is to develop continuous, year round nutrient monitoring in the Northeast. In 2015, NERACOOS launched a website for the Northeast Nutrient Observatory where you can access information about the project.  The website is located here.