San Francisco Bay has long been recognized as a nutrient-enriched estuary, but one that has exhibited resistance to some of the classic symptoms of nutrient over-enrichment, such as high phytoplankton biomass and low dissolved oxygen. However, recent observations suggest that the Bay’s resistance to high nutrient loads is weakening. The combination of high nutrient  concentrations and changes in environmental factors that regulate the Bay’s response to nutrients has generated concern about whether the Bay is trending toward, or may already be experiencing, nutrient-related impairment. 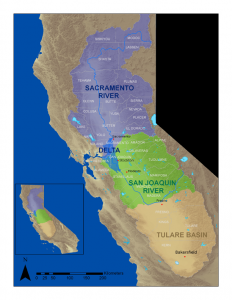 The San Francisco Estuary includes the
drainage basins for the Sacramento and San
Joaquin rivers. (Click graphic for expanded view.)

To address growing concerns about San Francisco Bay’s changing response to nutrient loads, the San Francisco Bay Regional Water Quality Control Board worked collaboratively with the Bay Area Clean Water Agencies (BACWA) and other stakeholders to develop the SFB Nutrient Management Strategy, which calls for a range of activities to develop the scientific foundation for well-informed management decisions. An initial activity within the Nutrient Strategy was to develop a conceptual model for nutrient load-response in the Bay, and identify critical data and conceptual gaps. That draft report, developed with input from a group of regional scientists and funded by the SF Bay Regional Monitoring Program (RMP), was recently completed (Senn et al., 2013).

The conceptual model report made two broad recommendations: 1. Develop science plan(s) for SFB’s sub-embayments that targets the highest priority management and science questions; 2. Develop and implement an integrated program that combines observation/assessment, prediction of ecosystem response, and process-level studies that combined inform impairment assessment and decisions about how to best manage nutrients. Of relevance to the IOOS Ocean Technology Transition program, both recommendations call for analysis and continued development of a 40-year time-series that includes hydrographic parameters, nutrients, phytoplankton biomass and community composition, and occurrence of potentially harmful species.

The University of California Santa Cruz was awarded a three year grant by IOOS’ Ocean Technology Transition Project to incorporate consistent and cost-effective observations of Harmful Algae Bloom (HAB) and phytoplankton composition into the San Francisco Bay monitoring program to use as a metric to support ecosystem assessments. The project will integrate the Imaging Flow CytoBot (IFCB) into existing USGS R/V Polaris vessel transects, onto a planned mooring in the South San Francisco Bay, and on existing piers and/or fixed platforms monitoring to evaluate the potential to replace or augment phytoplankton enumeration (traditional microscopy) and HPLC pigment analysis to monitor phytoplankton composition and HABs in the San Francisco Bay.

Planned activities are listed below by implementation year.  Status updates will be added to this page as the project progresses. 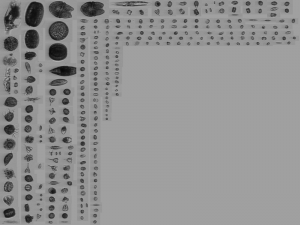 The PIs were able to use the IFCB on USGS cruises and at the Santa Cruz Wharf to document an Akashiwo bloom in the coastal ocean.  These data were used to inform several management groups and the public (via news reports) about the presence, cell density, and potential impact of the bloom event.  The image below shows an example of the data, processed using the automated classifier, for the San Francisco Bay. The IFCB detected an Akashiwo bloom in SF Bay in September 2016, and successfully classified it using the automated classifier. The upper plot shows cell
density along the cruise track. The lower plots show the ancillary cruise data. The data were used by several management groups in response to the bloom.

For more information about this project contact Dr. Raphael Kudela.