Animal-borne sensors can be an effective method for collecting oceanographic data and, in certain circumstances, may be able to provide wider, more detailed and more cost-effective coverage than ‘traditional’ oceanographic tools.  These environmental data are collected simultaneously with information concerning the habitat use and behavior of the tagged animals.

Researchers tagging a tiger shark as part of the second phase of a project to observe the movements of tiger sharks caught and tagged around the island of Maui. Source: Hawaii Institute of Marine Biology.

In 2015, IOOS’ Ocean Technology Transition Project provided funds, through the Pacific Islands Ocean Observing System (PacIOOS), to the Hawaii Institute of Marine Biology (UH) for a two-year project to establish a functional Operational System for Acquiring and Disseminating Oceanographic and Behavioral Data Telemetered from Tagged Sharks covering the main Hawaiian Islands.  The project will initially focus on deploying environmental sensor tags on tiger sharks caught within the coverage footprint of the array but exploratory deployments will also be made with six gill and hammerhead sharks.  Tiger sharks sample the water column between the surface and approximately 300 meters while six-gill sharks sample between 300 and 1000 meters.  Data will be acquired via the Argos satellite system and through land-based relay receivers installed on several islands as part of this project.  All relevant data will be relayed to the Global Telecommunications System (GTS) and similar data bases. Previous results indicate that areal coverage will range from very nearshore out to several hundred miles from the Hawaiian Islands.  New types of tags will be tested in the array as they become available from our industry partner.

UH will work in close collaboration with its primary industry partner Wildlife Computers, Inc., located in Redmond, WA, to ensure continued technical support of the data relay receivers, the continued refinement of the environmental sampling algorithms - e.g., “virtual cast” software that transcribes animal-acquired environmental data into a format analogous to a CTD (Conductivity, Temperature, and Depth) cast, and continued beta-testing of new sensors such as salinity/conductivity and chlorophyll.  An interrelated activity will be continued deployment and evaluation of miniaturized video camera packages. 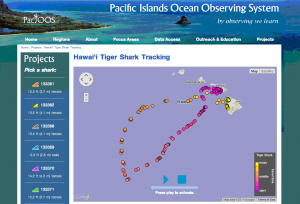 The implementation and administration of the proposed system will be tightly coordinated with the PacIOOS program at the University of Hawaii’s Joint Institute of Marine and Atmospheric Science (JIMAR). PacIOOS will receive data from the integrated observation system and, importantly, will act as the portal for automated uploading of environmental data into the GTS and other large scale data archives.  PacIOOS will continue to support the tagging project’s extremely popular Shark Tracking web site which disseminates shark behavioral data to the general public.

Planned activities are listed below by implementation year. Status updates will be added to this page as the project progresses.