This page serves to summarize each of the current COMT Projects.  More info about the COMT can be found here. The overall COMT is managed by our non-federal partner, the Southeast University Research Association (SURA).  SURA has a COMT website that can be found at testbed.sura.org. The 2013-2017 funded COMT projects include:

Hypoxia is a condition threatening the health of the Chesapeake Bay in which oxygen levels drop so low that fish and other animals are stressed or killed, and the incidents of hypoxia-causing 'dead zones' are on the rise.

Hypoxia in Chesapeake Bay occurs usually in the summer and is primarily the result of human activities that deliver nutrients such as nitrogen and phosphorus into the Bay, but new evidence from the testbed scientists suggest that wind forcing plays a significant role. The added nutrients support blooms of algae which in turn are decomposed by oxygen-depleting bacteria. The resulting hypoxia can suffocate animals that cannot move away, such as shellfish, and -- depending on how quickly the hypoxia develops -- either kill or force into less suitable habitat free-swimming animals such as fish, shrimp, and crabs.

This project is providing the modeling information that will enable best management practices and mitigation measures to be targeted in the Chesapeake Bay and on the human activities that have the most significant effect on decreasing nutrient transfer from land to coastal ecosystems.

The below figures represent sample products from the Hypoxia Forecast Tool (see www.vims.edu/hypoxia) that are being developed with stakeholder input from the recreational and commercial fishing communities of Chesapeake Bay.  The COMT project is working with NOAA CO-OPS to transition these hypoxia forecasts to the Chesapeake Bay Operational Forecast System (https://tidesandcurrents.noaa.gov/ofs/cbofs/cbofs.html). In the future these products will also be hosted by the IOOS Mid-Atlantic Regional Association (MARACOOS). 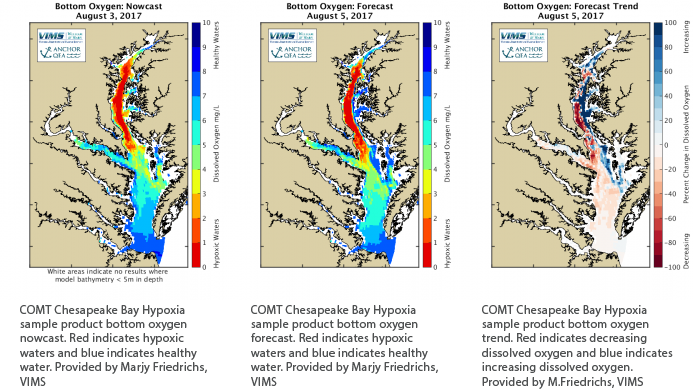 A large hypoxic area (15,000 km2 on average; the largest in U.S. coastal waters) forms every summer over the Texas-Louisiana shelf in the northern Gulf of Mexico due to decay of organic matter that is primarily derived from nutrient inputs from the Mississippi/Atchafalaya River System. Interannual variability in the size of the hypoxic region is large. The 2008 Action Plan (Hypoxia Taskforce, 2008) put forth by the Mississippi River/Gulf of Mexico Watershed Nutrient Task Force, an alliance of multiple state and federal agencies and tribes, calls for a reduction of the size of the hypoxic zone to a running 5-year mean of 5,000 km2 through nutrient management in the watershed. The goals of this project are to:

A comparison of the hypoxic area in FVCOM and in ROMS. The two model use the same simple oxygen model. Image credit: Arnaud Laurent

The US West Coast component of the Coastal Ocean Modeling Testbed brings together researchers involved in coastal ocean modeling, data assimilation, and prediction with the goal to improve existing prediction systems and compare performance of different models and data assimilation approaches. The existing real-time forecast systems, supported by NOAA IOOS regional observing systems, include (1) the Oregon-Washington system run by a group at Oregon State University as part of NANOOS, (2) the LifeOcean system focused on the Washington coast and run at the University of Washington, supported by NANOOS and the State of WA, (3) the California system run by RSSI supported by CeNCOOS and SCCOOS, and (4) the regional West Coast system run at the University of California – Santa Cruz, supported by CeNCCOOS. These efforts include different approaches to data assimilation and three different biogeochemical models.

The metrics for skill assessment and the best practices for data assimilation and coupled physical-biogeochemical modeling are transitioned to the West Coast Ocean Forecast System that is being developed and tested at NOAA CSDL and implemented in the near real-time by NOAA CO-OPS.

Computational domains of three ocean forecast systems operating off the US West Coast through IOOS: (a) the 10-km resolution West Coast model, 4DVAR, (b) the 3-km CA model, 3DVAR, (c) the 2-km resolution OR-WA model, 4DVAR. The color is SST (different periods in August are shown within each domain, the range of colors is approximately from 8 to 20oC). Image credit: (a) C. Edwards, (b) Y. Chao, and (c) A. Kurapov.

(i) Forecasts provided by our three model systems (see Figure below) will be compared to available in-situ and satellite observations. Inter-model comparisons will be done for our three models and will then be extended for global and regional operational NOAA and Navy forecast products, including Navy HYCOM (Bub) and NOAA NCEP RTOFS (Mehra), as well as regional Navy products.

(ii) Three existing NPZ-type biogeochemical models (already integrated in ROMS), including the 6-component NPZDO (Banas; Banas et al., 2009), the 11-component NEMURO (Edwards, Moore; Kishi et al. 2007), and the 31-component CoSiNe (Chai et al., 2002; Dugdale et al., 2002) will be compared to each other and to available data, using the COMT testbed tools. The practicality of developing a unified biogeochemical model across all three regions and a multi-model ensemble will be evaluated.

(iv) The OR-WA 4DVAR system will be tested with a new (ensemble-based) model error covariance suitable for anisotropic ocean conditions in the presence of the Columbia River (Kurapov).

(v) The Ensemble Kalman Filter assimilation method will be implemented into the CA model and results will be compared to 3DVAR (Cornuelle).

The goal of this COMT project is to extend the present wave/surge operational forecasting capability from mild-sloped coastal areas such as the US East and Gulf of Mexico coasts to steep-sloped areas such as around Caribbean and Pacific islands and transition this capability to NOAA’s National Hurricane Center and local WFOs.  Project objectives are to: (1) compile a data set of observations collected around Puerto Rico and the USVI by the IOOS Caribbean Regional Association; (2) evaluate multiple, coupled wave/surge/inundation models against this data; (3) recommend the most suitable model for transition to operations and (4) assist with the transition.  These outcomes will also be applicable to U.S. island regions in the Pacific and may therefore guide future implementations at NOAA’s Central Pacific Hurricane Center.

U.S. island regions in the Caribbean and Pacific pose many challenges to the accurate modeling and prediction of hazardous wave-dominated storm surge inundation events.  The relative importance of physical processes leading to inundation in steep-sloped, reef-edged island environments differs from those in milder-sloped mainland environments.  Relatively little research has been done in these environments, constituting a significant knowledge gap.  To compound this uncertainty, little observational data are available in many island environments.  As a result, the U.S. National Weather Service (NWS) currently lacks operational surge and inundation guidance for these regions. An exception to this general data scarcity is Puerto Rico and the U.S. Virgin Islands (USVI), which frequently experience strong tropical and extra-tropical storms resulting in high waves, storm surge, and river flooding.  A large number of observational instruments have been deployed here, many by IOOS Caribbean Regional Association partners, creating a valuable resource for the evaluation and advancement of operational wave/surge/inundation models of these areas.

Three teams - an operational assessment team (federal user group), a numerical modeling team and a data management team - will work together to accomplish the following tasks:

Final evaluation, recommendations and dissemination: All teams will compile joint recommendations regarding the most suitable model or models for near-term and long-term operational implementation.  Recommendations will also be made regarding current and future observational networks and field campaigns.  All teams will provide assistance in the transition of the recommended model, incl. setting up COMET web-based training materials, if required. 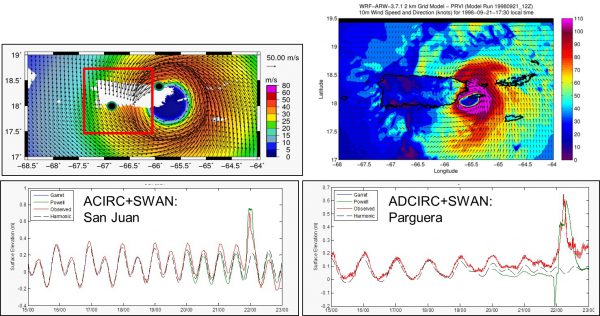 Visualization and Data Access Services for COMT Model and Data Archive:
SciWMS  is a Python-based set of visualization services (OGC WMS) including support for structured and unstructured grids – this prototype is working with FVCOM and ADCIRC and will be extended to other models. SciWMS image below for Ruoying He's model rendered directly from a DAP server.

The goal of this project is to improve the function and performance of SciWMS so it can be used to visualize all compliant model results and observational data stored on the COMT archive server and to develop a SciWMS based web client to perform the visualization.  All related source code will be archived and made available via github.  Documentation and deployment tools will be created to allow IOOS RA’s and others to rapidly deploy similar SciWMS-based web clients to visualize compliant data on other Thredds servers.