During the week of October 15, the U.S. Integrated Ocean Observing System (IOOS) showcased a strong presence at the Marine Technology Society (MTS) Oceans 2012 Conference in Hampton Roads, VA. A U.S. IOOS booth, at the exhibit hall entrance, highlighted interagency and regional IOOS partnerships and invited visitors in to explore some of the latest in ocean observing equipment in a hands-on venue. Visitors talked to IOOS partners representing academia, industry, and government while they saw, touched, and learned about high frequency radar systems, ocean gliders, and buoys. 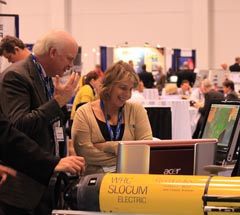 On October 16, more than 120 attendees showed up to see national leaders deliver lightning talks on how ocean and coastal observations benefit Americans every day. In this “Ignite” session, NOAA leaders like Margaret Davidson, Craig McLean, Louis Uccellini, Libby Jewett, and Kate Bosley joined high-profile speakers from around the nation to deliver 5-minute talks to automatically-advancing slides.

During a separate Town Hall the next day, former NOAA Administrator VADM Conrad C. Lautenbacher joined a cast of extraordinary leaders from across the nation highlighting today’s needs for tomorrow’s IOOS. The town hall included a demonstration of real-time collaboration technology from StormCenter Communications, Inc. 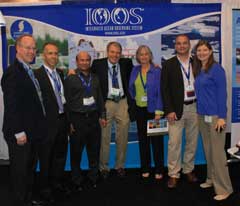 Oceans’12 was dedicated to the late Admiral James D. Watkins, a true visionary and leader, an individual who demonstrated a lifelong commitment to the oceans.  This was accomplished with great aplomb but as Jack Dunnigan also said on reflecting what would ADM Watkins say - we still have a lot of work to do – let’s get to it!   The US IOOS Ignite session, held Tuesday afternoon, was a resounding success with over 100 persons in attendance and a truly electric atmosphere created by the fast-paced format and outstanding presentations by the session’s 10 speakers.  NOAA’s Assistant Secretary for Environmental Observation and Prediction, Dr. Kathryn Sullivan kicked off the event and got the audience in the right frame of mind.  The talks definitely “ignited” the audience to think differently not only about IOOS, but about how important ocean observing is to understanding and protecting our oceans and our planet as evidenced by the steadily rising applause from the audience as each speaker completed his/her talk. Caris, a prominent geospatial software company, also sponsored refreshments that were appreciated by all who attended. Overall, this was one of the highlights of the conference and an Ignite session may now become a staple component of future MTS/IEEE Oceans conferences. The session was recorded on video by ESIPO and will soon be available on the IOOS web site.

Another highlight of Oceans 2012 was the equally successful Town Hall session held on Wednesday morning.  The Town Hall, with over 100 persons in attendance, provoked a highly informative discussion on the future of IOOS as a prelude to the IOOS Summit that will take place later this fall. Moderated by former NOAA Administrator VADM Conrad C. Lautenbacher, Jr., USN (Ret.), and introduced with opening remarks from Dr. Sullivan, the Town Hall kicked off with a brief but impressive technical demonstration from StormCenter Communications’ Dave Jones on how IOOS data can contribute to collaborative, real-time decision-making along our nation’s coasts.  VADM Lautenbacher then skillfully facilitated a wide-ranging conversation with the panelists and audience on IOOS challenges and opportunities that featured numerous important insights and recommendations, particularly from the very different perspectives of the distinguished panel.  The Town Hall was a great prelude to the upcoming US IOOS Summit that will be held in Washington, DC, in November 2012. 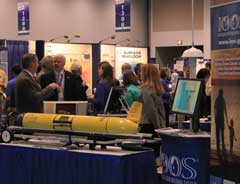 Regions – NERACOOS, MARACOOS and SECOORA. Adjacent to each other and at the front of the exhibit hall, the IOOS and NOAA booths were a major success in both communicating the breadth and reach of our programs, but also as a natural gathering spot all week for our staff, our many partners, and scores of interested conference participants. The IOOS layout included regional and national banner stands about IOOS, a new large IOOS pop-up stand, an HF Radar antenna, a Slocum glider and PowerPoint presentations about IOOS programs.  Our StormCenter Communications partners were also present all week in the IOOS booth, providing hands-on demonstrations of how their software enables access to IOOS and other data.  There were many outstanding US IOOS talks throughout the week in the IOOS and Coastal Radar sessions, as well as interspersed throughout the conference that showed IOOS WORKS!  This type of event does not happen by itself and if I try to name everyone who made this possible, I would leave critical folks out – so let me just say that the many folks who worked very hard to make Oceans ‘12 a success, you all made IOOSians and Ocean Observing colleagues proud.  THANK YOU!

How Big Should My Water Wings Be?
Margaret A. Davidson, NOAA Office of Ocean and Coastal Resource Management
video | presentation (ppt)